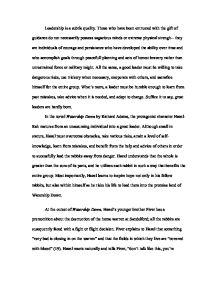 Watership Down. In the novel Watership Down by Richard Adams, the protagonist character Hazel-Rah matures from an unassuming individual into a great leader.

Leadership is a subtle quality. Those who have been entrusted with the gift of guidance do not necessarily possess sagacious minds or extreme physical strengh-- they are individuals of courage and persistance who have developed the ability over time and who accomplish goals through peacefull planning and acts of honest bravery rather than unrestrained force or military might. All the same, a good leader must be willing to take dangerous risks, use trickery when necessary, cooperate with others, and sacrafice himself for the entire group. What's more, a leader must be humble enough to learn from past mistakes, take advice when it is needed, and adapt to change. Suffice it to say, great leaders are hardly born. In the novel Watership Down by Richard Adams, the protagonist character Hazel-Rah matures from an unassuming individual into a great leader. Although small in stature, Hazel must overcome obstacles, take various risks, attain a level of self-knowledge, learn from mistakes, and benefit from the help and advice of others in order to sucessfully lead the rabbits away from danger. Hazel understands that the whole is greater than the sum of its parts, and he utilizes each rabbit in such a way that benefits the entire group. Most importantly, Hazel learns to inspire hope not only in his fellow rabbits, but also within himself as he risks his life to lead them into the promise land of Watership Down. At the outset of Watership Down, Hazel's younger brother Fiver has a premonition about the destruction of the home warren at Sandelford; all the rabbits are susequently faced with a fight or flight decision. Fiver explains to Hazel that something "very bad is closing in on the warren" and that the fields in which they live are "covered with blood" (19). Hazel reacts naturally and tells Fiver, "don't talk like this, you're frightening me" (19). His response also communicates a certain amount of denial: if Fiver's vision is correct, than this would interupt the status-quo and disrupt Hazel's level of comfort both in the warren and in the mind. ...read more.

This shows his growing humility, and his ability to adapt to change and cooperate with others. Hazel's ability to cooperation with and benefit from other animals is one of the main reasons why he is a successful leader. In Chapter Twenty Three, Hazel offers food and shelter to the wounded Kehaar because he knows that if he can make friends with the animal, he might benefit the rabbits some time in the future. In spite of Kehaar's intitial hostility, Hazel cooperates with him until he is fully recovered. After Kehaar has healed, Hazel suggests sending him to look for does in the warrens far across the Downs (196). Blackberry, who is the smartest of all the rabbits, praises this idea and says to Hazel, "that bird could find out in a day what we couldn't discover for ourselves in a thousand" (196). Hazel, therefore, proves his leadership by constantly looking to benefit the group by any means necessary. Soon Hazel is rewarded for his cooperation with the bird when Kehaar returns to tell the rabbits that he has found the Efrafra warren which has many does. Hazel and the other rabbits are pleased with Kehaar's reciprocity and everyone is in awe of Hazel's abilty to cooperate with and benefit from animals who might otherwise be seen as elil. Later in the story, Hazel risks his life to help a tiny field mouse escape from a falcon because he feels the mouse might also be of help to the rabbits in the future, like Kehaar. The mouse then promises to help Hazel sometime in return for saving his life. Hazel's cooperation with these two animals explains why he is a good leader-he is willing to take risks that others are not, and he is able to find new ways to benefit from the help and advice of others. Part of the difficulty in being a good leader is that Hazel must not only continually take risks for the others, but he must also survive those risks. ...read more.

In the final chapters, Woundwart and his Efrafran army are waiting to attack the Honeycomb warren when Hazel meets them half way to offer them a compromise: "We ought to make other warrens between us-start one between here and Efrafra, with rabbits from both sides. You wouldn't lose by that, you'd gain. We both would. A lot of your rabbits are unhappy now, and it's all you can do to control them, but with this plan you'd soon see a difference. Rabbits have enough enimies as it is. They ought not to make more among themselves. A mating between free independent warrens-What do you say?" (425) Hazel proves that he is a more effective leader than Woundwart because he is willing to be diplomatic and tactful; Hazel cares for the advancement of all rabbits, not just his own. Needless to say, Hazel leads his rabbits in a very different manner from that of Woundwort, and resolves to win the battle not through direct confrontation but through a trick that would end the fight before it began. Throughout Watership Down Hazel proves his mettle and shows himself to be a capable leader. His ability to think for the entire group and sacrafice his own desires for the whole is what sets him apart from Woundwart and even the other rabbits in his warren. Never too hasty with his judgments, Hazel always risks his own life rather than those of the other rabbits. He is brave but not foolhardy, and his every action is geared toward the benefit of the entire group. He will not leave anyone behind and trusts his fellow rabbits equally. Although he is neither as intuitive as Blackberry nor as spiritually deep as Fiver, he makes decisions rapidly and confidently and in doing so he inspires faith in the rest of the rabbits. Most importantly, Hazel believes in himself and in his comrads. He is willing to listen to their advice and is able to utilize each rabbit's talent for the greater good-which is reminiscent of the greatest rabbit leader of all, El-ahrairah. ...read more.