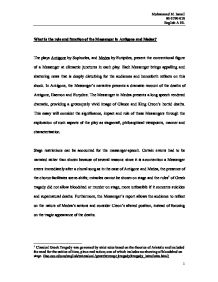 What is the role and function of the Messenger in Antigone and Medea?

What is the role and function of the Messenger in Antigone and Medea? The plays Antigone by Sophocles, and Medea by Euripides, present the conventional figure of a Messenger at climactic junctures in each play. Each Messenger brings appalling and shattering news that is deeply disturbing for the audiences and henceforth reflects on this shock. In Antigone, the Messenger's narrative presents a dramatic recount of the deaths of Antigone, Haemon and Eurydice. The Messenger in Medea presents a long speech rendered dramatic, providing a grotesquely vivid image of Glauce and King Creon's horrid deaths. This essay will consider the significance, impact and role of these Messengers through the exploration of such aspects of the play as stagecraft, philosophical viewpoints, manner and characterization. Stage restrictions can be accounted for the messenger-speech. Certain events had to be narrated rather than shown because of several reasons: since it is a convention a Messenger enters immediately after a choral song as in the case of Antigone and Medea, the presence of the chorus facilitates scene-shifts; miracles cannot be shown on stage and the rules1 of Greek tragedy did not allow bloodshed or murder on stage, more unfeasible if it concerns suicides and supernatural deaths. ...read more.

The Messenger also recreates the dramatic exchanges in dialogue between the characters, hence sustaining the interest of the audience. These techniques serve not only to help portray the scene but also give insight into characters and create a terrifying atmosphere whereby the audience is left in awe. An interesting literary feature employed by Euripides, but not Sophocles, is the historic presents: using present tense while narrating, "she arranges her hair...she parades through the house"10. Therefore, it transforms the passage from a narrative into a vivid actuality and making a strong appeal to the senses. The speaker makes his hearer into a kind of pseudo eyewitness. Euripides also structures the Messenger's speech in which the stanzas are set to reflect the tone and pace of the narrative. The second stanza tells of the poison taking effect, "All this took place in a few moments"11, the heightened anxiety of the messenger presumably speeding up his pace of the Messenger and consequently having an exciting effect on the audience. While in Antigone, the pitiful state of Creon was reflected in the presumably monotonous single paragraph by the Messenger. The Messenger gives audience an insight to the character's thought process and the effect it produces on other characters. ...read more.

Fortune may come to one man, now to another, as prosperity increases; happiness never.'20 He proclaims that human life 'is a shadow'21, an imitation of another perfect form, referring to the imperfection and fallibility of human nature. The employment of the Messenger may be viewed as a means for Euripides to convey his own philosophical views about human life. These matters appear to be the Messengers' own lamentations of the tragedies, suggesting that part of the enjoyment and purpose of the play is to serve as a lesson in life. Messenger- speeches are an important element in both Medea and Antigone, the playwrights having the capacity to comment and report on the violent consequences of the previous plot development. Without it, the audience would lack a great deal of understanding and appreciation on the play's underlying themes and issues, thus detracting from the overall worth of the tragedy. Both Messengers share a similar milieu, and their roles and functions are also comparable, raising its excitement, and simultaneously contributing to a smooth flow and the overall dramatic value of the play. It can have a considerably powerful impact on the stage business, atmosphere, characters and the audience. The ancient Greeks loved to hear a good story well told and delighted in the artistic use by the performer of the power of the human voice. ...read more.