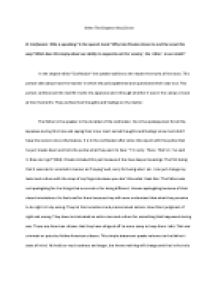 &quot;When The Emperor Was Divine&quot;. Confession: Who is speaking? Is the speech ironic? Why has Otsuka chosen to end the novel this way? What does this imply about our ability to separate out the enemy, the other, in our midst?

﻿When The Emperor Was Divine Q: Confession: Who is speaking? Is the speech ironic? Why has Otsuka chosen to end the novel this way? What does this imply about our ability to separate out the ?enemy?, the ?other?, in our midst? In the chapter titled ?Confession? the speaker admits to the reader the truths of the story. This person talks about how the manner in which the police gathered and questioned them was true. This person confesses all the real life truths the Japanese went through whether it was in the camps or back at their home life. They confess their thoughts and feelings on the matter. The father is the speaker in the duration of the confession. He is the spokesperson for all the Japanese during this time and saying their inner most sacred thoughts and feelings since most didn?t have the voice to do so themselves. It is in the confession after some time spent with the police that he just breaks down and tells the police what they want to hear. ...read more.

He holds so much sadness and anger, but knows nothing will change and that is the truly sad part about it all. In the confession it continues even further on with the father saying, ?So go ahead lock me up. Take my children. Take my wife? (142). The father is proving a point in this moment. Usually when a parent?s child is in danger they will fight for their child to stay and make an exchange but not in this case. The father has already been stripped bare of his culture, heritage, and home by the American government. That has taken away his supposed freedom and rights. Has desecrated his home and made him public enemy number one, so why not finish the job off by taking his family away from him too. He feels lost and like he has nothing left to give or live for. All the things that made him, he has been taken away quite forcefully, and then he?s being told to act more American. ...read more.

She wanted to show how there really are no lines between ?other? and ?enemy.? The lines become blurred somewhere along the way. People do not know when or how but they just get associated with the enemy. For instance when 9/11 happened, people were quick to judge and assume every Muslim had something to do with that terrorist attack. When really the ones being attacked were the Muslims not associated with the terrorist group. They had nothing to with the group but were bunched with them because of the same religion they shared. Like when the father says, ?Who am I? You know who I am. Or you think you do? (142). You don?t know a person until you get to know them and their beliefs. You can?t just bunch them together to make things easier because then you are only closing yourself off to the world where there is no possibility of hope for generations to come. ...read more.