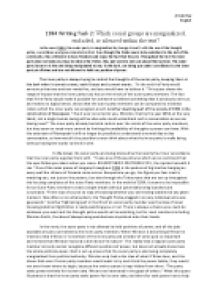 Which social groups are marginalized, excluded, or silenced within the text of 1984?

﻿Arnab Dey English 1984 Writing Task 2: Which social groups are marginalized, excluded, or silenced within the text? In the novel 1984, the outer party is marginalized by George Orwell with the use of the thought police, surveillance and governmental control. Even though the Proles seem to be outsiders to the rest of the community, they still seem to have freedom and enjoy the fact that they do. Throughout the text the inner party does not take any steps to silence the Proles, they just seem to not care about their actions. The outer party however is the one being manipulated to stay in the dark, are being put under surveillance by the inner party at all times and are not allowed to hold any position of power. The inner party is always trying to control the thoughts of the outer party, keeping them in the dark when it comes to wars, world issues and current events. ?In the end the Party would announce that two and two made five, and you would have to believe it.? This quote shows the range of impact that the inner party truly has on the minds of the outer party members. ...read more.

?It was one of those pictures which are so contrived that the eyes follow you about when you move. BIG BROTHER IS WATCHING YOU, the caption beneath it ran.? One of the main pieces of imagery throughout 1984 is the posters of big brother hanging on every wall the citizens of Oceania come across. Everywhere you go, the figure you fear most is watching you, not just on the posters, but also through the Telescreens that are set up throughout the housing complexes of the outer Party members. In the world of 1984, it seems to be impossible for an Outer Party member to take a single breath without potentially being watched and scrutinized. ?There was of course no way of knowing whether you were being watched at any given moment. How often or on what system, the Thought Police plugged in on any individual wire was guesswork.? Another frightening part in the life of an outer party member was the idea of never knowing whether Big Brother is really watching you or not. There is always a chance you could do whatever you want and the thought police would not be watching, but for most members including Winston Smith, the idea of always being watched was imprinted onto their heads. ...read more.