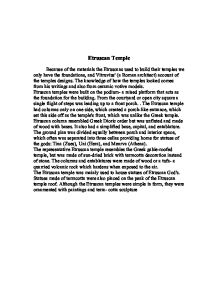 Etruscan Temple Because of the materials the Etruscans used to build their temples we only have the foundations, and Vitruvius' (a Roman architect) account of the temples designs.

Etruscan Temple Because of the materials the Etruscans used to build their temples we only have the foundations, and Vitruvius' (a Roman architect) account of the temples designs. The knowledge of how the temples looked comes from his writings and also from ceramic votive models. Etruscan temples were built on the podium- a raised platform that acts as the foundation for the building. From the courtyard or open city square a single flight of steps was leading up to a front porch. . The Etruscan temple had columns only on one side, which created a porch-like entrance, which set this side off as the temple's front, which was unlike the Greek temple. Etruscan column resembled Greek Dioric order but was unfluted and made of wood with bases. It also had a simplified base, capital, and entablature. The ground plan was divided equally between porch and interior space, which often was separated into three cellas providing home for statues of the gods: Tina (Zues), Uni (Hera), and Menrva (Athena). The representative Etruscan temple resembles the Greek gable-roofed temple, but was made of sun-dried brick with terracotta decoration instead of stone. The columns and entablatures were made of wood or a tufa- a quarried volcanic rock which hardens when exposed to the air. The Etruscan temple was mainly used to house statues of Etruscan God's. ...read more.

Evolution and typology of the Etruscan temple o Temples with a single cella The oldest examples of Etruscan temples have a very simple ground plan. A quadrangular cella is preceeded by a pronaos only formed by two columns placed in the axis of the side walls of the cella. We find this type of temple in many terracotta models from 500 B.C. onwards. This type gave birth to a great and important group of Roman temples. These temples had a cella without alae and with four columns or more in the pronaos. The pronaos tends to occupy the front half of the building. This type occurs in our Roman material from � 200 B.C. The earliest examples are temples B and D and the Port temple at Cosa, the larger temple on the acropolis of Norba. From these temples, with a single cella, we can deduce that the tripartition of the cella, which is mostly described as typical for Etruscan temples, is not at all the typical arrangement. This tripartition was later necessitated by the fact that several deities were worshipped in the same temple: each deity got his own cella. In his more elaborate form this type evolved to the two types described by Vitruvius: a building plot with a ratio of 6 to 5 of which the length is divided in two. ...read more.

A single cella is placed against the rear wall. The rear wall has extensions to the right and to the left. From this extensions start the alae formed by a colonnade. That this type was typically Etruscan is proven by the Tomba Ildebranda at Sovana, where this kind of temple was imitated in the fa�ade of a tomb. Tomba Ildebranda Actual situation Reconstruction A good example of this kind of temple in Roman context can be seen in temple C of the Largo Argentina at Rome. This temple was dedicated to the goddess Feronia and build around the beginning of the third century B.C. Towards the Late Republic and the beginning of the Empire this type was hellenized and used e.g. as base for the groundplan of the temple of Augustus on his forum. Here we see a combination of the single cella with alae, and hellenistic columns close to each other, just as we already saw in the Tempio della Pace at Paestum. o Temples with a single cella and closed alae This type is not mentioned by Vitruvius. Here the alae are changed to lateral corridors with closed side walls along the entire length of the temple. Columns are placed on the front between the ends of these side walls, which formed elongated antae. A good example of this type can be seen in Fiesole, near Firenze, where a third century B.C. temple was found under the rests of a republican temple of the first century B.C. ...read more.