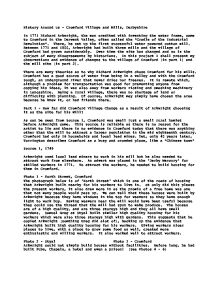 History Around us - Cromford Village and Mills, Derbyshire

History Around us - Cromford Village and Mills, Derbyshire In 1771 Richard Arkwright, the man credited with inventing the water frame, came to Cromford in the Derwent Valley, often called the "Cradle of the Industrial Revolution". There, he set up the first successful water powered cotton mill. Between 1771 and 1800, Arkwright had built three mills and the village of Cromford had grown considerably. Over time the site has changed and so is the subject of many disagreements by historians. In this project I shall present my observations and evidence of changes to the village of Cromford (in part 1) and the mill site (in part 2). There are many theories as to why Richard Arkwright chose Cromford for his mills. Cromford has a good source of water from being in a valley and with the Cromford Sough, an underground river that never dries nor freezes. It is remote which, although a problem for transportation was good for preventing anyone from copying his ideas, it was also away from workers rioting and smashing machinery in Lancashire. Being a rural village, there was no shortage of land or difficulty with planning. Of course, Arkwright may simply have chosen the area because he knew it, or had friends there. ...read more.

Photo 10 - A Corn Mill, at the second Dam, 1780 Source 10 - Watercourses, 1994 Part 2 - What Changes were made in the Mill site During the Period 1771 - 1800? Richard Arkwright changed and improved the mill site considerably in the period between 1771 and 1800. However, fires also damaged the mill site. For these reasons, it is very difficult for historians to build an accurate picture about the original mill site. Today, the first mill is only three storeys high. In 1771, it was probably five storeys high. Photo 11 - The Roof of the first mill An article in the 'Derby Mercury', 12th November 1890 tells of a fire at the Cromford mills. The article is simple and factual, the journalist had no reason to lie, indeed his reputation would have been tarnished had he done so, thus we can assume that this fire did occur, perhaps two floors of the mill were damaged beyond repair and so a makeshift roof was built. "the upper two storeys of the building were removed after a serious fire." - The Arkwright Society Guidebook. Photo 12 - The Warehouse adjacent to the first mill Photo 13 - Quarry Bank Mill Photo 12 is of the building next to the first mill. ...read more.

Which was built around the same time and had one large wheel, proving that it was possible and the technology was around. I disagree with this as there is a dividing wall in the wheel pit in the second mill, as shown in Photo 19. Photo 19 - The Dividing wall in the wheel pit of the second mill In conclusion, Arkwright completely changed Cromford village. Without his mill, the small hamlet would probably never have grown into the large town it is today. 'Cotton Arkwright' says that "he has built an entire town as well..." "...with shops to meet the needs of the workers". As well as building the town, he also transformed the landscape, building a series of dams and changing the watercourses in amazing engineering feats. The mill site changed a great deal from 1771 to 1800. The first mill was almost certainly five floors tall and 30 feet wide, with rows of Georgian windows. It had waterwheels on the north wall and eastern wall, and probably had a waterwheel on the north wall before the extension. The second mill was probably seven storeys high. As for the waterwheels, I believe there were two separate ones because it would be odd to place a dividing wall in if there was nothing to divide, but perhaps we will never know for sure. Some mysteries may stay here, in the cradle of the Industrial Revolution. ...read more.