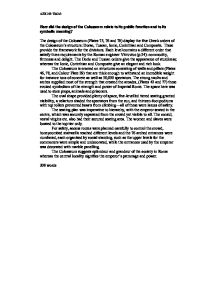 How did the design of the Colosseum relate to its public function and to its symbolic meaning?

How did the design of the Colosseum relate to its public function and to its symbolic meaning? The design of the Colosseum (Plates 75, 76 and 78) display the five Greek orders of the Colosseum's structure: Dorac, Tuscan, Ionic, Corinthian and Composite. These provide the framework for the divisions. Each level contains a different order that satisfy three requirements by the Roman engineer Vitruvius (p.54): commodity, firmness and delight. The Doric and Tuscan orders give the appearance of sturdiness; whereas the Ionic, Corinthian and Composite give an elegant and rich look. The Colosseum is erected on structures consisting of walls and pillars (Plates 46, 78, and Colour Plate 29) that are thick enough to withstand an incredible weight for instance tons of concrete as well as 50,000 spectators. The strong vaults and arches supplied most of the strength that created the arcades, (Plates 42 and 77) these evoked symbolism of the strength and power of Imperial Rome. The space here was used to store props, animals and prisoners. The oval shape provided plenty of space, five-levelled tiered seating granted visibility, a velarium shaded the spectators from the sun, and thirteen-foot podiums with top rollers prevented beasts from climbing-all of these were issues of safety. ...read more.

Statius, a poet and writer from Naples, describes in his piece Silvae how a lion battles in its final fight. Like Martial's epigram, poem 7, the lion is compared to a brave human warrior in his final fight. Suetonius, an imperial secretary in Rome was a biographer, praised the Roman games. The Emperor Titus (C5) demonstrates the goodness and kindness of the emperor. He states: '...he gave a most magnificent and costly gladiatorial show.' Apuleius, an orator, philosopher and novelist from Numidia, showed amusement in his works, such as The Ass in the Arena (C2) where Lucius is turned into an ass. Cicero, an orator and politician from Rome, attitude towards the Roman game was contrary with 'good old Roman virtues' (C8). His letters to his friends were intended for publication and they were organized in the history of time. In his letter Pompey's Shows (C6) he discusses an incident with elephants where the crowd feels compassion for them, this is also mentioned in TV7. Cicero states: 'But what pleasure can it be to a man or refinement when either a powerless man is torn by a very powerful beast [...] if such things are worth seeing, you have seen them often; and we who were there saw nothing new.' ...read more.

revelled in the wickedness...'. From the above examples it is clear that the attitudes towards the Roman games differed. Martial and Statius viewed the games as Roman soldierly values. They see the contenders, animals and human, promoting the morals and standards of Rome. However, Seneca and St Augustine saw the games as sheer butchery that was by no means a form of neither entertainment nor historical meaning. They were both concerned on what effects the games had on the spectators such as their state of mind, on the other hand little is said about the contenders themselves. However, unlike Seneca and St Augustine, Martial and Statius show some compassion towards the animals in the arena, they regard them as combatants rather than wild beasts who display values such as strength, courage and desire to win, these were thought highly of within the Roman society. While Cicero and Pliny the Younger had similar values with the Roman virtues where they praised Caesar and spoke of the importance of the displays of skill and bravery. They both thought the role of the games played were important where gaining prestige and status for those in political life. Suetonius is another who praised the emperor and his acts. Overall, the philosophers commented on the effect of brutality on spectators and Christians viewed the death of a gladiator as a blow against evil. ...read more.