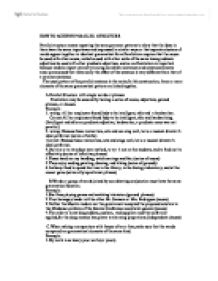 HOW TO ACHIEVE PARALLEL STRUCTURE Parallel structure means repeating the same grammar patterns to show that the ideas in them have the same importance and expressed in similar ways or that separate clusters of words appear together in identical grammatical form.Parallelism requires that the nouns be used with other nouns, verbs be used with other verbs of the same tense,predicate adjectives be used with other predicate adjectives, and so on.Parallelism is important because readers expect symmetry among coordinate sentences and sentenceelements areso pronounced that rhetorically the effect of the sentence is very different from that of a common sentence. ...read more.

Samson or Mrs. Rodriguez.(nouns) 3.Neither the Muslim leaders nor the government accepted the proposed solution to the Mindanao problem of the Islamic Conference secretariat-general.(nouns) 4.The order to arrest drug addicts, pushers, and suppliers must be uniformly applied,for the drug menace has grown to alarming proportions.(independent clauses) C.When making a comparison with theuse of as or than,make sure that the words compared are grammatical elements of the same kind. Example: 1.My work is as heavy your work.(or yours) 2.Maria's father is as hardworking as Josefa's father.(or Josefa's) 3.Our patriotism is as intense as theirs. 4.The delegates form the Southeast Asian nations are more knowledgeable in banking procedures than those from the Middle East. D.Maintain parallelism I sentences using correlative conjunctii ...read more.