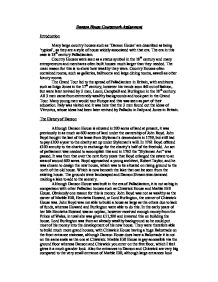 The History of Danson House

Danson House Coursework Assignment Introduction Many large country houses such as 'Danson House' are described as being 'typical', as they are a style of house widely associated with that era. The era in this case is 18th century Palladianism. Country Houses were seen as a status symbol in the 18th century and many entrepreneurs and merchants often built houses much larger than they needed. The main reason for this is to show how wealthy they were. Country Houses often contained rooms, such as galleries, ballrooms and large dining rooms, aswell as other luxury rooms. The Grand Tour led to the spread of Palladianism in Britain, with architects such as Inigo Jones in the 17th century, however his trends soon fell out of fashion, but were later revived by 3 men, Leoni, Campbell and Burlington in the 18th century. All 3 men came from extremely wealthy backgrounds and took part in the Grand Tour. Many young men would tour Europe and this was seen as part of their education. Italy was visited and it was here that the 3 men found out the ideas of Vitruvius, whose ideas had been later revived by Palladio in Italy and Jones in Britain. The History of Danson Although Danson House is situated in 200 acres of land at present, it was previously in as much as 600 acres of land under the ownership of John Boyd. ...read more.

All the houses have a Cornice and a Frieze running below the triangular pitch at the front of each house, and the Frieze also adds to the attractiveness of the house. The cornice gives protection to the rest of the house aswell as making the house look better. Danson House is not entirely symmetrical. The north and south sides are perfectly symmetrical, whereas the east and west sides are not symmetrical. The other three houses are actually symmetrical if you minus the wing on Chiswick House. The main entrance to Danson House stands well out from the rest of the house, which makes it look bigger than the house actually is and also the structure draws back whereas at Marble Hill although the main entrance stands out from the rest of the house. The walls actually curve forward as if a welcoming gesture which makes it that much more pleasant. Stourhead and Chiswick like to draw attention to the entrances with columns. The main entrance at Chiswick is actually drawn back into the house, which is slightly peculiar but also makes you feel a little more welcome, as you feel like you are inside the house when you are really not. The roof on Danson is triangular and has slate tiles incorporated into its design. This is similar to all the houses mentioned except for Stourhead House, which has a flat roof with a balustrade on it with 3 figures on it. ...read more.

Many houses, such as Chiswick House and Marble Hill would have been symmetrical, however Danson House was not symmetrical entirely. It did not incorporate a dome onto the roof which would flood the building with natural light aswell as make the house look bigger. The hosue is similar in many ways itself and has tributes to people and indicates a respect of the culture that Palladianism originated from, it also features a large balustrade around it along with rustication present and that is why I have answered the question the way I have. I believe that Danson House has based its design on many main Palladian features such as Rustication and the use of Balustrades which are almost ever present on all Palladian Houses, but the designer did not feel the need to incorporte small features such as the dome temple or a tablet on the front of the house. A factor that may have influenced this could have been money. John boyd may not have been able to afford all the little Palladian features and thought that he could make it look similar to a typical Palladian Villa even if he did miss out a couple of features. This however does not tak away the fact that Danson House was still built in an era where Palladiansism was a triviving fashionable architecture, and does incorporate a Palladian Look unless you look a lot harder and a lot more in depth. ...read more.