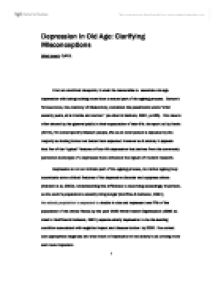 Depression in Old Age. From an uncritical viewpoint, it would be reasonable to associate old-age depression with being nothing more than a natural part of the ageing process. Burtons famous book, the Anatomy of Melancholy, contained the pessimistic wor

Depression in Old Age: Clarifying Misconceptions Word count: 3,401. From an uncritical viewpoint, it would be reasonable to associate old-age depression with being nothing more than a natural part of the ageing process. Burton's famous book, the Anatomy of Melancholy, contained the pessimistic words "after seventy years, all is trouble and sorrow." (as cited in Baldwin, 1997, p.536). This view is often shared by the general public in their expectation of later life. As reported by Harris (1975), for contemporary Western people, life as an older person is reposted by the majority as having turned out better than expected. However as it stands, it appears that few of the "typical" features of late-life depression that derives from the commonly perceived stereotype of a depressed have withstood the rigours of modern research. Depression is not an intrinsic part of the ageing process, but rather ageing may accentuate some clinical features of the depressive disorder and suppress others (Baldwin et al, 2002). Understanding this difference is becoming exceedingly important, as the world's population is steadily living longer (Gottfries & Karlsson, 1997); the elderly population is expected to double in size and represent one fifth of the population of the United States by the year 2030 World Health Organisation (1999 as cited in Gottfries & Karlsson, 1997) expects elderly depression to be the leading condition associated with negative impact and disease burden by 2020. The correct and appropriate diagnosis and treatment of depression in the elderly is becoming more and more important. Currently, depression is defined using the same Diagnostics and Statistical Manual of Mental Disorders criteria as for any age. The DSM-IV contains several categories of mood disorders, including Major Depressive Disorder and Dysthymic Disorder (American Psychiatric Association, 1994). Major depressive disorder is defined by the presence of five of nine symptoms, one of which must be pervasive dysphoria or anhedonia. The other seven symptoms include change in appetite, sleep disturbance, psychomotor retardation or agitation, fatigue, feelings of worthlessness or guilt, difficulty concentrating and recurrent thoughts of death (Qualls and Knight, 2006). ...read more.

This stereotype is inaccurate and helpful. The empirical literature portrays a different picture. Mitchell & Subramaniam (2005) conducted a systematic review focusing on robust studies that have directly compared the prognosis of depression in late life versus midlife. The results indicated that although rates of relapse and recurrence, and outcome was marginally poorer for older adults. However, reaction to treatment is to a large degree positive. It is found that up to 80% of patients will react well to treatment (Dunitz, 1997). Although it may very well be the case that depression is not a natural part of the ageing process as is misconceived by many, as has been mentioned previously, it may manifest it's self differently in later life and the reasons for its existence may be different in nature due the different way of life elders generally experience. The risk and protective factors associated with it may also be different to those who experience it in younger years. Gatz and his colleagues (Gatz, Kasl-Godley & Karel, 1996) proposed a developmental diathesis-stress model that takes both psychological, environmental and biological influences into account. Psychological vulnerability tends to decrease in later -life as does genetic risk. Furthermore according to the theory, other type of biological vulnerability become more frequent, including age-related neurobiological changes that may predispose to depression (Qualls & Knight, 2006). Several lines of research support these propositions. Firstly, when known risk factors for depression are statistically controlled, older adult actually have lower levels of depressive symptoms than do middle-ages adults (Mirowsky & Ross, 1992). Regarding genetics, family history has been found to be less common among older adults with these disorders (Devanand et al., 2004, as cited in Qualls & Knight, 2006). However, there is much empirical evidence that biological factors play a larger role in depression with age. There is believed to be a direct connection between physical illness and depression. ...read more.

Interestingly, theft/loss and financial crisis were the most enduring as depression was not dependant on the time of the event. Prince et al (1997) suggest that the enduring life circumstances favouring this event predisposed towards depression. Late-life depression is a complex, yet its nature is similar to that among other ages in many respects. The current diagnostic systems in place do not seem to be adept at capturing the most commons form experience during age and so changes are needed in order to decrease its current underdiagnosis. Qualls & Knight (2006) suggest that a dimensional approach may be of better use, one that considers the frequency and severity of a range of depressive symptoms. Furthermore, stereotypes associated with old-age depression need to be dissolved, both from the clinical perspective and the layperson's perspective. The researchers state that they "believe that recognition by non-medical personnel is an important issue because the elderly individuals' families may also play a role in the process of recognizing the symptoms and encouraging their elderly relatives to consult with a physician" (Ruppel et al, 2010, p.). There is, however, a problem with the sample size used throughout this study, so these findings may be debateable. Moreover, it is important to consider the fact that old-age depression is far more heterogenous and so aetiologies will be multiple and complex. The effects of the risk factors and stressors will manifest themselves differently due to the sets of occurrences that are associated with older adulthood such as physical illness and negative life events. Disregarding depression in old age can have devastating effects, because of the high rate of suicide (Dennis,2009) and because the condition is highly treatable. The number of risk factors and protective an elderly person is different to those of younger years. Therefore, aging can be construed not as an inevitable march towards depression, but rather acts as a catalyst through which depression can occur. There is a need change in the diagnostical systems and attitudes that exist about elderly depression, that reflect the different aetiology behind old depression that causes it to manifest itself differently to other ages. ...read more.