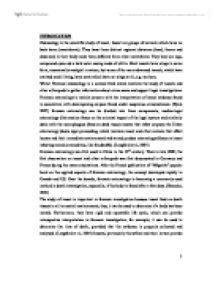 Entomology is the scientific study of insect.

INTRODUCTION Entomology is the scientific study of insect. Insect are groups of animals which have no back bone (invertebrate). They have three distinct regional divisions (head, thorax and abdomen) in their body make them different from other invertebrate. They have six legs, compound eyes and a hard outer casing made of chitin. Most insects have wings in some form, occasionally vestigial in nature, but some of the more advanced insects, which have evolved social living, have casts which have no wings at all, e.g. workers. Whilst Forensic entomology is a science field which involves the study of insects and other arthropods to gather information about crime scene and support legal investigations. Forensic entomology is mainly concern with the interpretation of insect evidence found in association with decomposing corpses found under suspicious circumstances. (Byrd, 2007) forensic entomology can be divided into three components; medico-legal entomology (this section focus on the criminal aspect of the legal system and similarly deals with the necrophagous (feed on dead tissue) insects that infest corpses) the Urban entomology (deals legal proceeding, which involves insect and other animals that affect human and their immediate environment) and stored product entomology (focus on insect infesting stored commodities, like foodstuffs). (Langford et al, 2005) Forensic entomology was first used in China in the 13th century. Then in late 1880, the first observation on insect and other arthropods was first documented in Germany and France during the mass exhumations. After the French publication of "M�gnin's" popular book on the applied aspects of forensic entomology, the concept developed rapidly in Canada and US. Over the decade, forensic entomology is becoming a commonly used method in death investigation, especially, if the body is found after a few days. (Benecke, 2001) The study of insect is important in forensic investigation because insect feed on death tissues in all terrestrial environments, thus, it can be used to determine if a body has been moved. ...read more.

Insects recovered from decomposing corpse can also be used for toxicological analysis; due to the big appetite of insect on corpses, the soft tissues and other evidential materials needed for toxicological analysis could be quickly eating up, however, an Entomologist can recover the insect larva and run standard toxicological analyses on them as they would do with human tissues. Since insect larvae's tissues assimilate drugs and toxins that are accumulated in human tissue prior to death, they can be used for toxicological analysis. Absolute care should be taking while collecting insect and other arthropods from a death scene because the remaining of a corpse could be disturbed. Thus, careful plans should be made for the collection of entomological evidence. Note should be taken and observation should be made to determine the immediate microhabitat surrounding the body. At a crime scene, the adult flies and beetles would be the first to be collected because they are fast moving and can quickly leave the scene when disturbed. The adult flies should be trapped with insect net, once they have been netted, they can be easily transferred to a vial of 75% ethyl alcohol. Beetles are collected with forceps or gloved fingers and placed directly in alcohol. The specimens should be properly labelled and care should be taken as alcohol can dissolve the ink, thus, pencil should be used. The collection label should contain information on the geographical location, case number, date and hour of collection, location on the body where removed and name of collector. After the corpse has been removed, many of the insect that inhabit the corpse would remain where the body has been moved, thus samples would be taken from the place, litters and soil from and under the corpse. A good way of collecting leaf litter is by exposing the upper surface of the soil and then, a separate collection from about the first two or three inches of topsoil should be collected. ...read more.

Accident studies also show that insect cause the top 20 automobile accidents. Thus, insects are important in everyday life and are used to gather evidence. The study of insect is also important in forensic investigation because it can affect the interpretation of blood spatter pattern analysis. Insects walking through pooled and splattered blood might produce tracking that are not recognizable; thus specks of blood caused by insects might mislead crime scene officer, unless they are aware of the appearance of blood contaminated insect. In addition, an analyst might be confused by faecal drops in an apartment that is very infected, because the droplets might test positive for human blood. Thus, it is important to recognise and properly document the natural artefact that may occur from the presence, feeding and defecation of insects. Insect are also used to determine country or point of origin. For example, in a case of imported cannabis, insects are used to determine the region of drug. In conclusion, the experiment was successful because the aims and objectives were met; i.e. we were able to identify and differentiate between the types of larva and pupa, also we were also able to classify the case sample as either larva or pupa and its type. The experiment was precise because we were able to see the structures of the samples from the low power microscope. It was also accurate because when the result was compared with other published information on similar samples, the results were similar. Thus if the experiment is carried out again following the same instructions, the result will be same or similar. REFERENCE LIST Benecke, M. (2001) Available at: http://www.ncbi.nlm.nih.gov/sites/entrez?cmd=Retrieve&db=PubMed&list_uids=11457602&dopt=AbstractPlus Accessed (4 Dec 2007) Bullington, S. W. (2004) Available at: http://www.forensic-ent.com. Accessed (2 December 2007) Byrd, J. H. (2007) Available at: http://www.forensicentomology.com/appear.htm#bwfl. Accessed (2 December 2007) NLM (2006) Available at: http://www.nlm.nih.gov/visibleproofs/galleries/technologies/blowfly.html Accessed (3 December 2007) Sukontason et al (2007) Identifying fly puparia by clearing technique: application to forensic entomology Thailand, Department of Parasitology, Faculty of Medicine, Chiang Mai University. ?? ?? ?? ?? 1 ...read more.