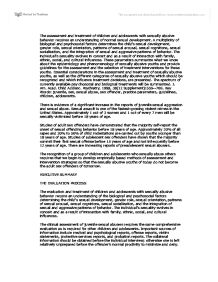 The assessment and treatment of children and adolescents with sexually abusive behavior.

The assessment and treatment of children and adolescents with sexually abusive behavior requires an understanding of normal sexual development. A multiplicity of biological and psychosocial factors determines the child's sexual development, gender role, sexual orientation, patterns of sexual arousal, sexual cognitions, sexual socialization, and the integration of sexual and aggressive patterns of behavior. The individual's sexuality evolves in concert and as a result of interaction with family, ethnic, social, and cultural influences. These parameters summarize what we know about the epidemiology and phenomenology of sexually abusive youths and provide guidelines for the assessment and the selection of treatment interventions for these youths. Essential considerations in the assessment and treatment of sexually abusive youths, as well as the different categories of sexually abusive youths which should be recognized and which influence treatment decisions, are presented. The spectrum of currently available psy chosocial and biological treatments will be summarized. J. Am. Acad. Child Adolesc. Psychiatry, 1999, 38(12 Supplement):55S--76S. Key Words: juvenile, sex, sexual abuse, sex offender, practice parameters, guidelines, children, adolescents. There is evidence of a significant increase in the reports of juvenile sexual aggression and sexual abuse. Sexual assault is one of the fastest-growing violent crimes in the United States. Approximately 1 out of 3 women and 1 out of every 7 men will be sexually victimized before 18 years of age. Studies of adult sex offenders have demonstrated that the majority self-report the onset of sexual offending behavior before 18 years of age. Approximately 20% of all rapes and 30% to 50% of child molestations are carried out by youths younger than 18 years of age. Studies of adolescent sex offenders have shown that the majority commit their first sexual offense before 15 years of age and not infrequently before 12 years of age. There are increasing reports of preadolescent sexual abusers. The recognition of a group of children and adolescents who sexually abuse others requires that we begin to develop empirically based methods of assessment and intervention strategies so that the sexually abusive youths of today do not become the adult sex offenders of tomorrow. ...read more.

al., 1984; Awad and Saunders, 1989; Fehrenbach and Monastersky, 1988; Lewis et al., 1979; Ryan et al., 1996; Shaw et al., 1993). Studies have found that approximately 40% to 80% of juvenile sex offenders manifest learning disabilities and behavior problems in school (Awad and Saunders, 1989; Ryan et al., 1996; Shaw et al., 1993). THE FEMALE JUVENILE SEX ABUSER There have been few studies of female sexual aggression (Fehrenbach and Monastersky 1988; Green, 1999; Green and Kaplan, 1994; Kaplan and Green, 1995; Knopp and Lackey, 1987; Mathews et al., 1997). Anderson (1996) surveyed young college women and found that 29% had engaged in sexual coercion, 28% had committed sexual abuse, and 43% reported initiating sexual contact by using sexually aggressive strategies. It is known, however, that 50% to 95% of female sexual abusers report a history of sexual victimization (Green, 1999; Kaplan and Green, 1995). Female juvenile offenders are more likely to have been sexually abused at a younger age and to have had multiple abusers and are 3 times more likely to have been sexually abused by a female (Mathews et al., 1997). Fehrenbach and Monstersky (1988) studied 28 female adolescent sex offenders, 10 to 18 years of age, with a mean age of 13.6 years. Fifteen had been charged with rape and 13 with raking indecent liberties. Ten of the female sexual abusers had assaulted males, 16 had assaulted females, and 2 had assaulted both males and females. Approximately 70% of the offenses took place while the offender was baby-sitting. The mean age of the victims was 5.2 years. Fourteen (50%) of the offenders had a history of being sexually abused. Mathews et al. (1989) described 5 variations commonly found among adult female sex abusers: (1) the female adolescent who opportunistically exploits and fondles younger children; (2) the female with a history of being sexually abused who subsequently abuses younger children; (3) ...read more.

CONFLICT OF INTEREST As a matter of policy, some of the authors of these practice parameters are in active clinical practice and may have received income related to treatments discussed in these parameters. Some authors may be involved primarily in research or other academic endeavors and also may have received income related to treatments discussed in these parameters. To minimize the potential for these parameters to contain biased recommendations due to conflict of interest, the parameters were reviewed extensively by Work Group members, consultants, and Academy members; authors and reviewers were asked to base their recommendations on an objective evaluation of the available evidence; and authors and reviewers who believed that they might have a conflict of interest that would bias, or appear to bias, their work on these parameters were asked to notify the Academy. SCIENTIFIC DATA AND CLINICAL CONSENSUS Practice parameters are strategies for patient management, developed to assist clinicians in psychiatric decision-making. These parameters, based on evaluation of the scientific literature and relevant clinical consensus, describe generally accepted approaches to assess and treat specific disorders, or to perform specific medical procedures. The validity of scientific findings was judged by design, sample selection and size, inclusion of comparison groups, generalizability, and agreement with other studies. Clinical consensus was determined through extensive review by the members of the Work Group on Quality Issues, child and adolescent psychiatry consultants with expertise in the content area, the entire Academy membership, and the Academy Assembly and Council. These parameters are not intended to define the standard of care; nor should they be deemed inclusive of all proper methods of care or exclusive of other methods of care directed at obtaining the desired results. The ultimate judgment regarding the care of a particular patient must be made by the clinician in light of all the circumstances presented by the patient and his or her family, the diagnostic and treatment options available, and available resources. Given inevitable changes in scientific information and technology, these parameters will be reviewed periodically and updated when appropriate. ...read more.