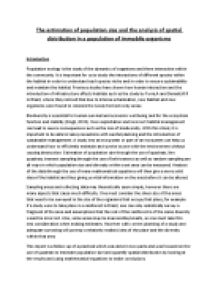 ﻿The estimation of population size and the analysis of spatial distribution in a population of immobile organisms Introduction Population ecology is the study of the dynamics of organisms and there interaction within the community. It is important for us to study the interactions of different species within the habitat in order to understand each species niche and in order to ensure sustainability and maintain the habitat. Previous studies have shown how human interaction and the introduction of infrastructure affects habitats such as the study by Turra,A and Denadi,M.R in Brazil, where they noticed that due to intense urbanization, new habitat and new organisms were found to colonize the newly formed rocky areas. Biodiversity is essential for human survival and economic well being and for the ecosystem function and stability (Singh, 2002). Over exploitation and incorrect habitat management can lead to severe consequences such as the loss of biodiversity. With this citied, it is important to be able to take precautions with careful planning and the introduction of sustainable management. A study into an ecosystem or part of an ecosystem can help us understand how to efficiently maintain and survive as one with the environment without causing destruction. Estimation of population size through the use of quadrats, line quadrats, transect sampling through the use of belt transect as well as random sampling are all ways in which population size and diversity within a set area can be measured. ...read more.

Clumped distribution is one which is most found in natural areas, and is mostly found in areas which show patchy resources. Distribution A is of clumped dispersion and in a real life field study such as in African wildlife a group of dogs known as lycoan pictus, which tend to remain in dense formations next to each other in order to ensure survival and due to hunting methods, as they hunt in groups (Creel, N.M. and S. ,1995). Uniform distribution which is shown through the results of distribution A, are less common in real life studies. These tend to show large distances between neighbouring individuals, this tends to happen due to competition for nutrients and space between species and therefore causes a large spread. Plants tend to exhibit uniform distribution such as salvia leucophylla which grows naturally in uniform distribution in California (Mauseth James,2008). Graph 1 shows the population estimate against the number of quadrats used. The bold line shows the actual number of organisms in the area which is 150; however the population estimate showed a range from 172 to 240 which is much larger than the actual number of organisms in that area. This is could be because the number of quadrats used for that area is too little or the quadrats used were not of relative size to the organisms in that area. Increased precision would show more correlation between the actual population and the population estimate. ...read more.