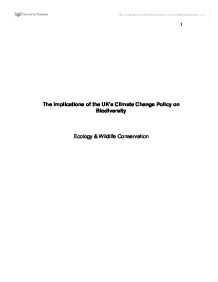 The Implications of the UK's Climate Change Policy on Biodiversity

The Implications of the UK's Climate Change Policy on Biodiversity Ecology & Wildlife Conservation The Implications of the UK's Climate Change Policy on Biodiversity Introduction Biodiversity is the unpredictability among living creatures and their environments. Biodiversity is necessary for human well-being because it give services, like food, medicines, clean water and soil stabilization. There is already a threat for biodiversity from the loss and disintegration of environment, pollution and persistent non-native species (Stuart, Donald, 2008). Variations in the climate pose a new challenge as it often intensifies the impacts of other forces. A recent report by G8 on The Economics of Ecosystems and Biodiversity assesses the failure of biodiversity internationally could be worth 7% of world GDP in 2050 (Stuart, Donald, 2008). Discussion The natural atmosphere is an essential part of the weather system, it is both affected by and affects weather internationally and locally. A significant body of speculation on climate change implication in the UK has been developed and is on-going. The idea is to put into practice developing theories and ideas, and to build on lessons learnt from these actions, and to also show that it ...read more.

EU member states have decided to halt the loss of biodiversity by 2010 and post-2010 targets are presently being argued. The EU White Paper (2009) Adapting to Climate Change highlights the connection between biodiversity and weather change and classifies the need for integrated strategy improvement. In the UK, the Climate Change Act (2008) identifies the requirement for implication measures, which are being observed through the cross-government program implicating to Climate Change (Martin, 2007). Weather change can permit non-native species formerly unable to live in the UK weather, to become established. Weather change raises the possibility that some non-native species, already established in the UK, will grow or spread geographically, and several of these species can become deceptive. Weather change can cause other conflicts and local species may be out-competed through non-native species. Certain events, like floods, can also accelerate the rise of non-natives species through affecting existing species negatively. Several non-native species that have established themselves in the UK are not invasive or detrimental to wider biodiversity (Martin, 2007). Several species arriving through natural range expansions may in fact be seen to enhance biodiversity. ...read more.