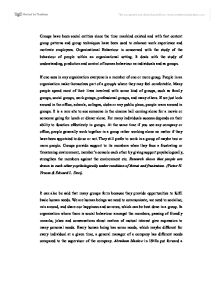 Groups have been social entities since the time mankind existed and with that context group patterns and group techniques have been used to enhance work experience and motivate employees. Organizational Behaviour is concerned with the study of the behaviour of people within an organizational setting. It deals with the study of understanding, prediction and control of human behaviour as individuals and as groups. If one sees in any organization everyone is a member of one or more group. People in an organization make themselves part of a group/s where they may feel comfortable. Many people spend most of their lives involved with some kind of groups, such as family groups, social groups, work groups, professional groups, and many others. If we just look around in the office, schools, colleges, clubs or any public place, people roam around in groups. It is a rare site to see someone in the cinema hall coming alone for a movie or someone going for lunch or dinner alone. For many individuals success depends on their ability to function effectively in groups. At the same time if you see any company or office, people generally work together in a group rather working alone no matter if they have been appointed to do so or not. They still prefer to work in a group of maybe two or more people. Groups provide support to its members when they face a frustrating or threatening environment, member's console each other by giving support psychologically, strengthen the members against the environment etc. ...read more.

The work done is much faster and more efficient. Group work saves time as people can arrive at a decision soon, rather than an individual taking a decision and then talking/presenting this decision to people who are involved in the process. A lot of companies require that people work in a group. At times when management levels are being cut, departments are being put together to improve the flow of information and to increase the speed of new product developments, it's important to know, how to work together with all these people. It is important not only for the performance of a person itself also for the performance of the whole group or company. In a group there can be delegation of authority i.e. each person can be assigned a particular task to fulfill this helps bring out qualities in people which may not have been possible if an individual were to undertake and complete a task. Working in groups helps people respect and understand each other as Professionals and Individuals. Miller and Form in their Industrial Sociology have mentioned that work is a group activity and they also mentioned that group collaboration does not occur by accident; it must be planned for and developed. If group collaboration is achieved, the work relations within a work plant may reach a cohesion, which resists the disrupting effects of adaptive society. (Management & Motivation, Victor H. ...read more.

Initially the miners were working in small groups and they were using less advanced techniques, they faced a lot of danger while they were working but these groups had become very cohesive socially and they provided some sort of psychological security to each other. This feeling changed due to introduction to new technology and a pay scale was introduced amongst the workers which lead to formation of status symbol. The entire feeling of a group had vanished and there was no improvement in productivity as expected. Trist recognised the problem and came up with the principle called the social-technical system. Later A K Rice used this principle in an Indian Textile Mill, where with the introduction of modern techniques there was not much improvement in the production as expected, because the workers had now become machine minders from skilled labourers, which disrupted their work pattern. Then Rice introduced the system of group working amongst the workers, small group were established which were self led, self regulating and performing all the task on their own, which then led to improvement in output as well as the quality of cloth. Thus one thing can be concluded that workers need to work in groups, instead of isolated members without any kind of interaction. They carry feeling and sentiments because of which they get emotionally attached to each other. "Once the group feel safe and secure in their groups they do their best to make the new system successful." (Principles of Organizational Behaviour - Robin Fincham & Peter Rhodes). ...read more.