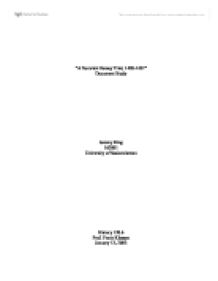 "A Norwich Heresy Trial, 1428-1431" Document Study Jeremy Ring 162001 University of Saskatchewan History 120.6 Prof. Frank Klassen January 13, 2003 Ring, 1 Heresy trials have been a primary source of understanding the past and the beliefs of the different levels of society. None has been more important than the documents involved in the manuscript of the Westminster Diocesan Archives MS. B.2. The section that will be dealt with is section 22, which involves a glover from Beccles, Mr. John Reve. John Reve is on trial for being a suspected heretic, and this article indicates his beliefs and opinions. This manuscript deals with all the fundamental Lollard beliefs in which John Wyclif proclaimed. The confession was one of only a few selections that had been written down in English; however the original was recorded in Latin by ecclesiastical authorities and clerics.1 Since this section was written by clerics and was part of a trial, this piece would have been an unpublished piece; however this section has been gaining a lot of attention by historians, being hailed as "the most important record of heresy trials in the British Isles before the Reformation."2 The trial took place April 18, 1430, in the Lambeth Palace, Norwich. ...read more.

This section is up for debate about the reliability of the writer. This was written by a church appointed cleric, who has been referred to as John Excestr4, which questions if this clerk actually wrote down what Reve had said, or if it had been tampered with in the benefit of the church. The final section involves Reve stating his apologies to Christ for his errors and explaining that he will contribute his life to stopping other heretics by exposing them instantly and turning them in. The content involved explains the mindset of the public, however many questions have to still be raised about the dependability. Ring, 3 This document has been proclaimed very important by numerous historians, but why a lot of people ask. This document includes the general beliefs of the Lollards, which is a subject that has become very interesting over the past couple of decades.5 The ideas expressed in John Reve's testimony explain many views on the Lollards overall beliefs. One of the most interesting would be the verse "Also that confession ought not to be made to any priest, but only to God, for no priest has the power to forgive ...read more.