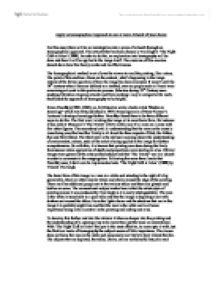 Apply an Iconographical Approach to one or more Artwork of your choice For this essay there will be an investigation into a piece of artwork through an Iconographical approach. The artwork that has been chosen is Van Gogh's 'The Night Caf� at Arles' (1888). In order to do this, an exploration into Iconography will be done and then it will be applied to the image itself. The outcome of this exercise should show how this theory works and its effectiveness. The Iconographical method in art allows the viewer to read the painting, like a story. The point of this enables a focus on the content, what's happening in the image instead of the formal qualities of how the image has been executed. It wasn't until the 19th century when it became defined as a method; even so people such as Vasari were examining art work in this particular process. Scholars during 19th Century were studying Christian religious artwork and from needing a way to categorize the work, they found the approach of Iconography to be helpful. Erwin Panofsky (1892-1968), an Art Historian wrote a book called 'Studies in Iconology' which was first published in 1939. Based upon six of Mary Flexner's Lectures it develops Iconology further. Panofsky found there to be three different ways to do this. ...read more.

He started out with the intentions of being an Art Dealer within one of his Uncle's buissness's, Goupil and Company. He traveled over to London for a two year placement and would visit Art Galleries in his spare time. Through this duration Van Gogh started to draw, making pencil studies of his surroundings. He later went on to live with a Reverand in London after he was fired from Goupil, he lived there working as a teacher to a small group of boys and assisting the Reverand in exchange for his lodgings. When he returned home his brother suggested he develop his passion for religion by attending college. He spent a year doing this before he subsequently dropped out and then attended another course in a different city to which he failed the exams there and eventually was given a short term job as a preacher in Wasmes. This biographical approach is to comprehend the roots. Van Gogh came into art fairly late but he had started to be influenced by artists already through his first job and then by visisting Galleries. From looking at his overall life it seems to be unstable with the moving about from place to place and the uncertaintity of his career, he goes from Art Dealer to Preacher not quite fitting in on the paths his family has followed. ...read more.

To pay off debts and to express his feelings of loneliness. Again from his letters to his brother Leo we can attain his actual thoughts on this painting September 1888 "In my picture of the 'Night Caf�' I have tried to express the idea that the caf� is a place where one can ruin oneself, go mad or commit a crime. So I have tried to express, as it were, the powers of darkness in a low public house,...." Using the three levels of Iconology has been a great aid in this investigation to understand the story to the image and in return to see how this theory works. With the intrinsic level, formal qualities was part of the story but the Iconology from what Panofsky has written is about content of subject matter. The deeper an examination goes the more the lines blur between content and form. For instance 'The Night Caf� at Arles' has multiple points of view as if the room had been opened out. The floor itself takes up most of the painting as if it was painted from above contradicted by the walls being seen straight on followed by the various directions of shadows. This distortion of view gives it a drunken feeling, like it was through Van Gogh's eyes. This is part of the story, to be aware of the formal qualities is to feel the emotion. ...read more.