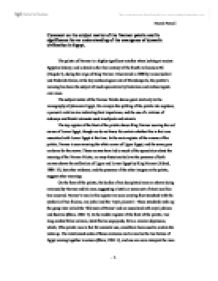 Comment on the subject matter of the Narmer palette and its significance for an understanding of the emergence of dynastic civilization in Egypt.

Comment on the subject matter of the Narmer palette and its significance for an understanding of the emergence of dynastic civilization in Egypt. The palette of Narmer is a highly significant artefact when looking at ancient Egyptian history, and is dated as the final century of the fourth millennium BC (Naqada 3), during the reign of King Narmer. Discovered in 1898 by James Quibell and Frederick Green, at the key archaeological site of Hierakonpolis, the palette's meaning has been the subject of much speculation by historians and archaeologists ever since. The subject matter of the Narmer Palette shows great similarity to the iconography of pharaonic Egypt, for example the splitting of the palette into registers, a person's relative size indicating their importance, and the use of a mixture of sideways and frontal elements used in subjects and animals. The top register of the front of the palette shows King Narmer wearing the red crown of Lower Egypt, though we do not know for certain whether this in fact was associated with Lower Egypt at the time. In the main register of the reverse of the palette, Narmer is seen wearing the white crown of Upper Egypt, and the same goes as above for the crown. These crowns have led to much of the speculation about the meaning of the Narmer Palette, as many historians believe the presence of both crowns shows the unification of Upper and Lower Egypt by ...read more.

It is unclear as to who these enemies and captives are, as they may be Egyptians who were against Narmer, or against the unification of Egypt (if the palette is interpreted as representing this), likewise they may be foreigners, such as Libyans or Asians. On both sides of the palette, significantly advanced hieroglyphs are present. The symbol of the catfish and chisel, which stands for 'Narmer', is present on each side, and several other featured subjects' names accompany their pictures (Aldred, 1980: 36). There are several arguments as to whether the hieroglyphs featured were intended to be writing at the time, or just pictorial elements that gained linguistic meaning during Egypt's later dynastic civilisation. The context of the palette is during the Naqada 3 period of pre-dynastic Egypt. During this period, key distinctive elements of Egyptian culture were beginning to emerge (Aldred, 1980: 34-35), and this is clear through the pharaonic iconography depicted. The palette is often seen as a distinctive step forward in the advancement of hieroglyphs, with several subjects' names featured next to their depictions (Aldred, 1980: 36), an evolution which is thought to coincide with the development of pharaonic art. Cosmetic palettes were popular at this time, though it is commonly believed that due to its intricacy and large size, even its material of siltstone (Shaw, 2004: 44), as well as its important religious location of Hierakonpolis, the Narmer Palette was more likely to have been a votive object for ritual use than a cosmetic palette (Aldred, 1980: 36). ...read more.

If the palette is interpreted as being commemorative of one year of King Narmer's reign, this clearly shows he had a strong power over his people and plainly depicts his subjects' relevant importance, as did the dynastic pharaohs after him. The probable emergence of the pharaonic art style, during the Naqada 3 period, definitely paved the way for what is now seen as iconic ancient Egyptian art, and the Narmer Palette is a fine example of this key phase. If the Narmer Palette is in fact representative of the unification of Upper and Lower Egypt, it can be seen as even more useful for examining the emergence of dynastic Egypt. The violence and suggestion of huge numbers of captives could show that there was a lot of opposition to Narmer, and also suggest that a large battle took place. These could both mean that, if the palette is interpreted as the joining of the two halves of the country, the journey to a united Egypt was not an easy one, during which many men may have lost their lives. In conclusion, the subject matter of the Narmer Palette is extremely power-oriented, as most exhibitions of royalty are, and undoubtedly represents a very powerful leader. Despite the meaning of the palette being unknown, its significance in understanding the emergence of a dynastic civilisation in Egypt is paramount, and the Narmer Palette is a key historical artefact which cannot be overlooked when studying ancient Egyptian history as a whole. ...read more.