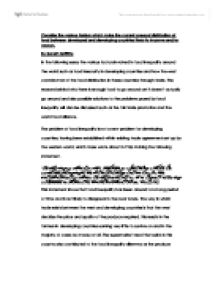 Consider the various factors which make the current unequal distribution of food between developed and developing countries likely to improve and/or worsen. By Gareth Griffiths In the following essay the various factors involved in food inequality around the world such as food insecurity in developing countries and how the west controls most of the food distribution in these countries through trade. The reasons behind why there is enough food to go around yet it doesn't actually go around and also possible solutions to the problems posed by food inequality will also be discussed such as the fair trade promotion and the world food alliance. The problem of food inequality is not a new problem for developing countries, having been established within existing trade agreements set up by the western world, which Kruse wrote about in 1966 making the following statement- 'developing countries point out that the so-called terms of trade are constantly changing to their disadvantage and in favour of the industrialised countries; development aid--so it is argued--is being completely neutralised by this harmful trend' (Kruse, 1966, p.16) This statement shows that food inequality has been around for a long period of time and is not likely to disappear in the near future. ...read more.

This is down to skills being lost in family groups by people dying due to HIV/AIDS and being unable to pass these skills on to the children of the family so they in turn are unable to adequately provide food for the family as they simply don't have the skills to do so. The medical implication also takes money away from what could be spent on improved infrastructure and farmland to increase economic value which would then increase food availability. The way in which the impact of the HIV/AIDS epidemic affects food security and malnutrition obviously depends on how the affected make their livelihoods as if the families are solely based on labour intensive activities such as agriculture then they are going to struggle immensely with the loss of man power on the land which puts them into a vicious circle of activity. The intervention needed to prevent skills being lost and food security being affected is a tough decision that needs to be made whether to care for the sick and dying or to improve education and support for those survivors which would then slow down the spread of the disease giving the country a fighting chance of recovery (Food Security, 2001) ...read more.

There are a lot of doubts about long term value of GM crops as not enough is known about the long term damage the crops could do to an area of land. The natural crops in surrounding areas could be affected by cross breeding from the GM crops so they do need careful consideration before they are undertaken and rolled out on a huge scale to developing countries (World Food Organisation, 2006). Overall there are many reasons for global food inequality and distribution that has been a problem for many years but with the intervention of IMF developing countries are receiving help in combating this problem which has affected them ever since trade routes were set up by the western countries. The problem is improving with lower levels of malnutrition and hunger being reported and increasing economic levels in developing countries the level of food inequality is getting better. Although the world food summit set a target to reduce the amount of undernourished in the world by half by 2015 the target will be missed despite all the aid and help provided so it just shows the scale of the problem in the world but over time the problem is improving it will just take more time. ...read more.