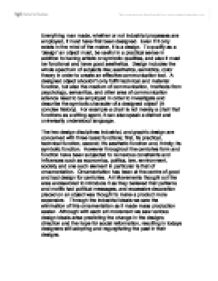 Everything man made, whether or not industrial processes are employed, it must have first been designed.

Everything man made, whether or not industrial processes are employed, it must have first been designed. Even if it only exists in the mind of the maker, it is a design. To qualify as a 'design' an object must, be useful in a practical sense in addition to having artistic or symbolic qualities, and also it must be functional and have good aesthetics. Design includes the whole spectrum of subjects like; aesthetics, semiotics, color theory in order to create an effective communication tool. A designed object shouldn't only fulfill technical and material function, but also the medium of communication, 'methods from psychology, semantics, and other area of communication science need to be employed in order to investigate and describe the symbolic character of a designed object' (A concise history). For example a chair is not merely a chair that functions as a sitting agent, it can also speak a distinct and universally understood language. The two design disciplines industrial, and graphic design are concerned with three basic functions; first, its practical, technical function, second; it's aesthetic function and, thirdly; its symbolic function. However throughout the centuries form and function have been subjected to numerous constraints and influences such as economics, politics, law, environment, society and one such element in particular is that of ornamentation. ...read more.

These articles, mass produced for the masses, were often poor in quality, impractical and ill suited to the conditions of the people it was intended. For most of the middle class, they had cramped living enviroments, so oversized, over decorated furniture was simply inappropriate. In revault movements like Art nouveau, and the Arts and craft movement, arose to combat the negative results of industrilisation and the struggle with historicism. Each movement shared similar goals, though where they differed was with their political, aesthetic and economic methods. The arts and crafts movement and the Art nouveau rejected the historicism and sought for simpler, more honestly constructed forms in the patterns of nature. They both found expression in organically flowing lines, stylized plant design, flower stems, and tendrills. The new ornamentation was carried out though all design disciplines transcending what they thought was the boundary between fine arts and applied arts. 'A room was not just a room in which one placed art, but was considered a total work of art, to which ornamentation served as a linking memeber, not just arbitrarily employed, but organically arising from the construction and function of an object' (Concise p:45). While artists through these movements rejected industrial mass production and thought that they reformed handwork and the handicrafts, by replacing patterns with their vegetation they were merely artists that were just as extreme in their application and positioning, as the historicism had been. ...read more.

Designers follow the rules of design elements and principles only to ensure that each design is of 'good design' and exceeds it market sector. Conclusion Each decade we encounter a new design movement endeavoring to restructure designs ideals with the design elements and principles. Designers today have sought not to conform society with design laws but rather to focus on regurgitating past design ideals to create new 'good design'. With each movement, designers should be endeavoring to create designs that are successful, visually powerful, elegant, timeless and immensely exciting. A successful design is the result of research and careful planning, it must be semantically correct, synatactically consistent, pragmatically understood by the user but in all it needs to evoke feelings. Each design can be perceived to house excessive ornamentation, which can be unnecessary graphic structures on buildings, or excessive images within a poster, but what ever the design, it can mean all sorts of things to others and absolutely nothing to the rest of the population. This is due to all individuals having natural prejudices and preconceptions to their approach to design (Powell, 2000). Each designer whether they are working on the same brief will produce different resolutions. Design is an idea derived from another idea, it is everywhere in life due to everything being designed. Therefore standard design principles and elements can be enforced however todays designers are not molding the whole of society to conform to a set of rules. ...read more.