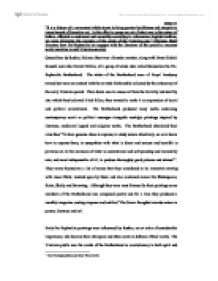 Examine how Pre-Raphaelite art engages with the literature of the period to examine social anxieties in mid-Victorian society.

"It is a history of a movement which strove to bring greater healthiness and integrity to every branch of formative art. In the effort to purge our art of what was in the nature of bathos, affected in sentiment and unworthy according to wholesome English tradition, we were following the example of the poets of the Victorian age." (Holman Hunt) Examine how Pre-Raphaelite art engages with the literature of the period to examine social anxieties in mid-Victorian society. Quoted here by Ruskin, Holman Hunt was a founder member, along with Dante Gabriel Rossetti and John Everett Millais, of a group of artists who called themselves the Pre-Raphaelite Brotherhood. The artists of the Brotherhood were all Royal Academy trained but were not content with the art style fashionably collected by the aristocracy of the early Victorian period. Their desire was to rescue art from the triviality and sterility into which they believed it had fallen, they wanted to make it an expression of social and political commitment. The Brotherhood produced many works containing contemporary social or political messages alongside nostalgic paintings inspired by literature, mediaeval legend and religious works. The Brotherhood chronicled their aims thus "To have genuine ideas to express; to study nature attentively, so as to know how to express them; to sympathise with what is direct and serious and heartfelt in previous art, to the exclusion of what is conventional and self-parading and learned by rote; and most indispensable of all, to produce thoroughly good pictures and statues"1. They wrote themselves a list of names that they considered to be immortals starting with Jesus Christ, insisted upon by Hunt, and also contained names like Shakespeare, Keats, Shelly and Browning. Although they were most famous for their paintings some members of the Brotherhood also composed poetry and for a time they produced a monthly magazine costing sixpence and entitled 'The Germ: thoughts towards nature in poetry, literature and art'. ...read more.

Lizzie was discovered working in the back room of a milliners shop in Leicester Square but her ancestry was that of a long line of craftsmen in South Yorkshire, and according to Lizzie's niece her grandfather should have inherited Hope Hall, Sheffield. A tradition asserted that the Siddall's were entitled to a coat of arms and other attributes of the landed gentry.6 Lizzie eventually married Rossetti in 1860, but was by this time seriously ill and he was leading the life of a free and easy man, Lizzie committed suicide with laudanum in 1862 leaving Rossetti grieving deeply and blaming himself for her death. Many of the other girls that the Brotherhood asked to sit, as models, were from even more humble backgrounds some were in fact fallen women. Lizzie's background was humble but that of Holman Hunt's girlfriend Annie Miller was even more so, she was discovered living with her uncle and aunt behind a public house in Cross Keys Court. Hunt claimed to have been so moved by Dickens' character Little Emily in David Copperfield that he set about finding a suitable area to create a painting on this subject and found Annie who at that time was a girl of easy virtue. Hunt used Annie to model for his painting 'The Awakening Conscience' which caused a public outcry when it was exhibited for the first time in 1853 because of its taboo subject matter, prostitution. The painting shows a girl turned resolutely away from her lover who is trying in vain to capture her attention and coax her back into his embrace. A contemporary critic spoke of the girl's 'provocative state of undress' and when the painting was exhibited at the Royal Academy visitors were shocked by the clear moral implications of the domestic scene. At the time Annie was modelling for this painting Hunt was teaching her to read and write, this was symbolised in the painting by the book on the table, which has since been identified as 'The Origin and Progress of the Art of Writing'. ...read more.

It is interesting to note that the nouveau riche entrepreneurs of the North, who had probably at some time had similar experiences to Tess, despised the aristocracy for not working and in order that they were not associated with them in this way made a point of working and being seen at their businesses. The Pre-Raphaelites painted undoubtedly the best 'true to nature' landscapes on canvas, but Hardy's astuteness at painting these realistic landscapes verbally is something that should also be admired and applauded. Writers like Hardy, Eliot, Dickens and Gaskill were among the best at using words to paint realistic images inside their reader's heads. They typically use recurrent iconographic descriptions, careful composition and pay close attention to contrasts of light and dark, colours and volume and mass. Their art is to blend the description of the landscape, plot and characters into one journey from the first page to the last, knowing that these metaphorical images were encouraging their readers to consider the need to address the social anxieties which existed outside of the novel. It is important to remember when we read these novels and view these paintings more than a hundred years after they made their debut, that the Victorian era spanned sixty-four years and the anxieties of society at the beginning were completely different to those in the middle and at the end. We must also realise that they are novels and not, however realistic, factual records of events. It is clear to see how literary works influenced the members of the Pre-Raphaelite Brotherhood, especially Biblical ones in the case of Hunt, and that they used their mastery of art to attempt to influence the Victorian public to abandon their 'laissez-faire' attitude and address the social anxieties and problems of the period. It would be reasonable to assume that both author and artist succeeded, if this was in fact their aim, as towards the end of the Victorian era attempts were made to address some of these anxieties, for example sanitation, working conditions and living standards were improved. ...read more.