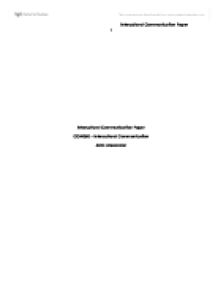 Culture is generally referred to as human patterns of activity and the symbolic structures that provide significance and importance to such activity. Everyone may in some way be shaped by their culture, whether by thought or action. These thoughts and actions are rooted deep within, and we do not pay it any mind until we are confronted with another culture and a different way of doing things. Upon first confronting a new culture, a businessperson’s first reaction is to think, “My way is best.” Business professionals may experience an unavoidable ‘culture clash.’ It is possible to avoid such a situation with some form of study, which may result in the realization that both he/she is wrong and there may be better ways of doing things. Furthermore, each one can open themselves up to possible problems in their culture. The following are issues, along with explanations, of different value orientations between the Bangladeshi and British that might affect cross-cultural communication. Cultural profiles of Bangladesh and the United Kingdom are drawn upon the basis of the work of Geert Hofstede, Fons Trompenaars and Edward Hall, used to analyze the factors which are likely to affect communication between people in these two countries.

Bangladesh has a power distance index score of 80. Bangladesh is known as a hierarchical society, and elders are highly respected because of their age and position. Elders are viewed as wise and therefore, granted respect. Decisions are made in the best interests of the group by the most senior male, based on age or position; this is also the case in family-owned/managed businesses. Regardless of what the relationship is between an employee and a Bangladeshi boss, it is considered as that of a close relative; this is due to a direct influence of the community life that Bangladeshi have experienced for years.

Elders and senior colleagues within the system of hierarchy are obeyed and highly respected in Bangladeshi work places. For the most part, discussions are led by the most senior person; thus, it is very important to have a solid relationship with senior figures, since final decisions rest with the highest-ranking business executive.

Bangladeshi has a score of 20 in the Individualism index. This indicates that Bangladesh is a country that believes in collectivism. The society is characterized by a rigid social framework that distinguishes between in-groups and out-groups. People count on their in-group (relatives, clans, organizations) to look after them and in exchange for that, they believe they are owed absolute loyalty. A certain consciousness prevails.  Bangladeshis believe in team work. Bangladesh has a masculinity index score of 55 and therefore has both feminine and masculine values. Caring for others and perseveration prevails side by side with material success and societal progress. In the Bangladeshi culture, people are always important. In the workplace, women are usually treated with respect. Therefore, foreign women find it easy to adapt and work in this environment; however, they need to take into account the conservative dress codes and plan their wardrobe accordingly.

Bangladesh has an Uncertainty Avoidance index score of 60. They easily accept the uncertainty inherent in life and are not threatened by deviant people and ideas, so they tolerate the unusual. The fluctuation in the country’s political situation is a good example of uncertainty in the society.  The people of Bangladesh are a lot more open-minded to opinions other they are not familiar with; rules are not as stringent but few compared to other places. They are also advocates of relativism on the philosophical and spiritual level. People in this culture are not expected to express emotions within their environment, which makes them apathetic.

Bangladeshi believe in diffused relationships. A boss is given the same courtesy outside the workplace as in the workplace. According to the classification of Edward Hall, they are of a high-context cultural orientation. High-context cultures are characterized by extensive information networks among family, friends, associates, and even clients.

Privacy and personal space is noticeably lacking and therefore, several generations often reside together. Personal space is thought of less, and differs from most European cultures; they converse very closely with one of the same gender, but this does not apply when speaking with the opposite gender, in which instance, the distance is normally increased.  Practices like these place additional importance on the interpersonal contacts, avoidance of conflict and a more indirect approach to communication.

Bangladeshis communicate in rich, long and contextualized sentences, which only make sense and can be properly understood in relation to body language, making them quite implicit and indirect communicators. This style of communication can be perceived to most people as rude and the information provided inadequate.

The Geert Hofstede analysis for UK illustrates the British’s strong feelings toward individualism and masculinity. The power and distance and uncertainty avoidance rankings are considerably lower than the first two. Long-term orientation ranks the lowest, indicating that change in England can be achieved more rapidly than in many other countries. Due to their low power distance ranking, they do not stress differences between power and wealth. They strongly believe in equality and opportunity for everyone in society. Hierarchy within organizations is the only exception to their belief in equality; usually there is a narrow salary range between the top and bottom of an organization, and the subordinates expect to be consulted. UK has a high invidualism ranking which indicates that within its society, individuality and individual right is paramount; in this society, individuals usually tend to form a larger amount of looser relationships. Competition, rather than cooperation, is encouraged.

Most British people are inspired by nature and often find it difficult to engage in small talk with people they do not know. An example would be a foreigner in London trying to spark a conversation with a local on the Underground; this would be frowned upon and the local may pretend to read the newspaper as a defense mechanism.  UK has a high masculinity ranking, which indicates that they experience a high degree of gender differentiation; males dominate a significant portion of the society and power structure, with females being controlled by males. Dominant values in society are material success and progress, and work is more important than personal relationships.

Standing too close will make Brits feel uncomfortable, because personal space is very important.  There is a general avoidance of touch and they hold a high regard for punctuality and courtesy, which is an important part of British business etiquette. For example, when a letter is mailed, prompt acknowledgement of receipt is required. British executives prefer to use letters and faxes over telephone to conduct business communication. They favor appointments made in advance (at least three days) over relatively short notice, which may cause them to decline a request.

In the UK, people are specific in their roles and therefore draw a clear line between their personal and professional lives. A boss is only the boss at work and not anywhere else. UK has a low-context cultural orientation. People in low-context cultures have a way of placing boundaries between different aspects of their lives, i.e. work, family, activities. They are very detailed in their communication as well, requiring as much information as possible; compared to high-context messages, sentences can become quite lengthy.

An understanding of the essence and significance of prospective businesses within different cultures is necessary for international investors who do business abroad. I presented a cross-cultural comparison about Bangladesh and the UK in this paper; now I would like to present a scenario to my readers which will explain how both cultures may interact.

The Five-Dimension Model of Bangladesh and UK Business Scenario:

Susan gazed out the window of the Radisson watching the sparkling lights below. The time was half past nine in Dhaka, and there were many returning from work. There was plenty of loud, bustling activity due to the rush hour traffic, which the city was famous for. It had been a couple of day since Susan touched down in this subcontinent, and the only thing she could think of was closing the joint venture telecommunication deal she had arranged with a mid- to large-size Bangladeshi company. Discussions have taken place for several days, yet the company has not reached any concrete decision. Susan started to become frustrated because of the amount of time it had been taking.  Everything was going so well with the negotiations, but then misunderstandings began to arise as the deal approached its final stage. Susan had expected the deal to close that morning, because they had several meetings over the past week; however, she did not understand that Bangladeshis do not like to be rushed during the decision-making process and that they rely heavily on approvals from senior management. Susan thought she could speed up the process, but in doing so, more and more issues came to light. The Bangladeshi felt that Susan was only interested in the finalization and implementation of the deal, and not the process; they started to question her abilities, intelligence, and sincerity. The Bangladeshis also felt uncomfortable and disrespected due to the informal way she addressed them, making her seem untrustworthy.  The deal that eagerly carried Susan from the UK to Bangladesh was seemingly close to unraveling, mainly due to cultural misunderstandings between both parties.  Time has also been an issue, as the Bangladesh and British see this differently. The Bangladeshis were interested in creating a relationship with their prospective business partner, but Susan did not have the same goals. Therefore, Susan may have been looked at as a workaholic Brit.

The situations in this scenario could have been resolved with proper training prior to the meetings and discussions. Both parties in the example above must understand multi-dimensional culture and business practices.  As a result, Susan will need to revisit her errors and attempt to take a crash course on-line or purchase a book about Bangladesh at the local bookstore.

It can be overwhelming to live, do business, in a foreign place that has a different culture from you own. Taking the time to educate one on the different cultural patterns will allow one to prevent any altercations, therefore eliminating possible issues.