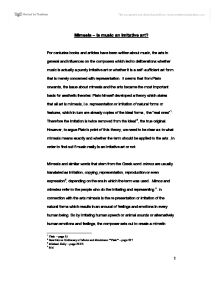 Mimesis - Is music an imitative art?

Mimesis - Is music an imitative art? For centuries books and articles have been written about music, the arts in general and influences on the composers which led to deliberations whether music is actually a purely imitative art or whether it is a self-sufficient art form that is merely concerned with representation. It seems that from Plato onwards, the issue about mimesis and the arts became the most important basis for aesthetic theories: Plato himself developed a theory which states that all art is mimesis, i.e. representation or imitation of natural forms or features, which in turn are already copies of the ideal forms, the "real ones"1. Therefore the imitation is twice removed from the ideal2, the true original. However, to argue Plato's point of this theory, we need to be clear as to what mimesis means exactly and whether the term should be applied to the arts, in order to find out if music really is an imitative art or not. Mimesis and similar words that stem from the Greek word mimos are usually translated as imitation, copying, representation, reproduction or even expression3, depending on the era in which the term was used. Mimos and mimetes refer to the people who do the imitating and representing4. In connection with the arts mimesis is the representation or imitation of the natural forms which results in an arousal of feelings and emotions in every human being. So by imitating human speech or animal sounds or alternatively human emotions and feelings, the composer sets out to create a mimetic piece of music. Likewise, the artist creates a mimetic painting by imitating shapes around him, trees, animals, other humans, and so on. ...read more.

produce sounds. This is probably their way of trying to imitate the characteristics of the language they hear in their every day surroundings, but without great success at the start. But this nevertheless proves that music, even if in this case these sounds cannot exactly be described as what we consider to be music, is in a way more original than the spoken word. Before man learnt to communicate using words he used to communicate with sounds, and after all, in its simplest form, music is an arrangement of sounds10, combined with rhythm and harmony. So really, music does not imitate the tones and features of the voice, it reinforces them. It combines the heart and the mind to create a full-scale expressive art form, capable of evoking all kinds of emotions. Whereas melody takes care of the actual reinforcement of language or other natural sounds, harmony establishes the expressed feelings more clearly. While unison is the most natural, most original harmony11, the arrangement of several parts add to the special harmony of a piece of music, making it more expressive and more effective in evoking the emotions the composer is intending to convey to his listeners. Moreover, harmony strings the different sounds of the melody together, making it more coherent and powerful, especially by adding different intervals to emphasise what the composer is trying to express. Tonal registers and the choice of instrument can also play an important role in the representation of emotions. A passage in a lower register, for example player on a cello, conveys a warm, soothing sensation which might express tranquillity to some people and safety or peace to others, depending on their associations with tones and registers like that. ...read more.

It is not even necessary that the storm is represented perfectly, unless the composition is accompanied by a detailed programme in which it is stated that there will be a thunderstorm occurring at some stage in the piece. Finally, in answer to the rather difficult question whether music is an imitative art or not, it has to be said that everybody probably thinks about this matter very differently. On the one hand music can very well be seen as being imitative and copying nature in order to have certain effects on the listener. But on the other hand music is more like a reinforcement or maybe even a beautification or criticism of nature's features. The term 'mimesis' itself, however, is far too vague15 to be translated into one single word, so as long as there is still confusion as to whether it is 'imitation', 'representation', 'expression'16 or the like, there will be no single solution to the connection between music and mimesis. But for now it can surely not be said for certain whether music is imitative or not and it strongly depends on the interpretation of the individual - another possible translation of mimesis. 1 Plato - page 15 2 New Grove Dictionary of Music and Musicians: "Plato" - page 327 3 Michael Kelly - page 232/3 4 ibid 5 Michael Kelly - page 234 6 Du Bos - page 18 7 ibid 8 New Grove Dictionary of Music and Musicians: "Plato" - page 327 9 Jean-Jacques Rousseau - page 212 10 ibid - page 214 11 ibid - page 215 12 Du Bos - page 19 13 Jean-Jacques Rousseau - page 215 14 Du Bos - page 20 15 New Grove Dictionary of Music and Musicians - page 709 16 Michael Kelly - page 233 1 ...read more.