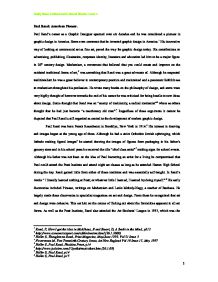 Paul Rand: American Pioneer. Paul Rand's career as a Graphic Designer spanned over six decades and he was considered a pioneer in graphic design in America. Some even comment that he invented graphic design in America.1 His innovative way of looking at commercial art as fine art, paved the way for graphic design today. His contributions to advertising, publishing, illustration, corporate identity, literature and education led him to be a major figure in 20th century design. Modernism, a movement that believed that you could create and improve on the outdated traditional forms of art,2 was something that Rand was a great advocate of. Although he respected traditionalism he was a great believer in contemporary practice and maintained and a persistent faithfulness to modernism throughout his profession. He wrote many books on the philosophy of design, and some were very highly thought of however towards the end of his career he was criticised for being hostile to new ideas about design. Some thought that Rand was an "enemy of mediocrity, a radical modernist"3 where as others thought that he had just become "a reactionary old man".4 Regardless of these arguments it cannot be disputed that Paul Rand is still regarded as central to the development of modern graphic design. ...read more.

Before the 1940s advertising was a commercial art rather than a design art. A printer or a Boardman mostly composed adverts. Rand wanted to fuse the two and didn't see why advertising couldn't be creative or abstract or witty. He was a believer that form follows function but didn't think this meant you had to be obvious or boring. The agency's clients included, among many others, Dubonnet, Disney Hats, Revlon and El Producto cigars. El Producto was a very successful campaign and reflects Paul's belief that visual communication could be simple yet effective. Rand re-created the El Producto logo, something he did on every account he worked on.14 The adverts consisted of line drawings collaged with photographs of cigars. The cigars were given human characteristics, which created a comic like feel to the ads. This meant that a different narrative could be applied to each poster. The El Producto campaign also reflected Paul Rand's use of wit and humour. Rand commented on his use of humour that "... the first priority is the idea-and my train of thought just happens to be funny."15 Rand's approach to drawing, sketchy and rough, was alluring and unique at the time. ...read more.

He challenged his students, as he believed this was the only way to achieve high quality work and although he may have been stern this was only due to his passion and dedication to his craft.20 Paul Rand's career led him to be a force to be recognised for designers and students throughout the world. His work and philosophies have influenced the shape of the design world today. Towards the end of his career he received criticism and mixed reviews of his thoughts and writings. He had become very serious about himself and the graphic design world around him. Michael Beirut commented that Rand due to his scathing attacks against new directions in design, he had lost his relevance. Michael Beirut commented that " [Rand said] Much contemporary graphic design, [...] is degrading the world as we know it."21 It wasn't argued that Rand's achievements weren't outstanding but that his comments on design were outdated and almost contradictory to his strive for modernism. Yet Rand remained consistently committed to design and the ideas he had about how to use type, images and graphic forms will continue to be timeless. I personally feel that although designers today have very different approaches to Paul Rand his legacy can still be seen and felt in modern practices. ...read more.