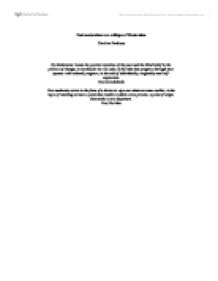 Post-modernism as a critique of Modernism Caroline Presbury By Modernism I mean the positive rejection of the past and the blind belief in the process of change, in novelty for its own sake, in the idea that progress through time equates with cultural progress; in the cult of individuality, originality and self-expression. Dan Cruickshank Post-modernity exists in the form of a desire to wipe out whatever came earlier, in the hope of reaching at least a point that could be called a true present, a point of origin that marks a new departure. Paul De Man Post-modernism is a movement of ideas arising from, but also critical of elements of modernism. Post-modernism is only understood after Modernism is explained as it opposes modernism, rejects it and progresses from it. Modernism began as a rejection of the old Victorian standards of how art should be made consumed and valued. It stems from the humanist ideals of rationality, reason, science and knowable self. Modernism held an emphasis on impressionism and subjectivity. It was interested in HOW seeing takes place rather than WHAT is perceived. It is a movement away from objectivity in narrative but rather looks at the immediacy of the here and now. ...read more.

Thus a modernist approach can occur in a post-modern society. Jean-Francois Lyotard thought that modernism created 'grand narratives' or stories that were told to explain the belief systems that exist. These 'grand narratives' claim universal truth, reason and stability. Post-modernism critiques these 'grand narratives' by revealing the contradictions and instabilities that the narratives attempt to mask. The Modernist grand narrative tells us that order is good and chaos is bad. Post-modern ideology rejects these artificial categories of good and bad. It instead prefers 'mini narratives' that are situational, temporary, subjective and provisional. Major avant-garde figures of Modernism helped to radically redefine what art could be and do. Les Fauves were a group of modern artists named because their paintings were as if done by wild beasts. They rejected the previous ideals of realism and narrative in painting and instead painted the sensation of a scene. Matisse would paint au plein air, with exaggerated brushstrokes and intense raw colour. He painted from his experience of a scene, not what he saw but what he felt whilst looking at it. Thus, he did not merely paint a table but the emotion it produced. ...read more.

He moved away from the usual painter's tools of the easel, palette and brushes. Instead he preferred the immediacy of sticks, trowels, knives and dripping fluid paint or a heavy impasto with sand, broken glass or other foreign matter added. Painting for Pollock was as much about the process as it was the product. On the floor I am more at ease. I feel nearer, more part of the painting, since this way I can walk around it, work from the four sides and literally be in the painting. The evolution of art in recent time is viewed through the modern and post-modern frames of reference. Throughout history artists have sought ways to critique the past through avant-garde methods and ideas. These theories and ideas are what forms artistic approach within a cultural context. Modernism challenged the traditions of its past, Post-modernism further progressed. Today, in our art-making practice we are perhaps in a state of stasis and limbo. We no longer invent the new as did modernism, nor can we shock and challenge as did post-modernism. The modernist age, of "one way, one truth, one city", is dead and gone. The postmodernist age of "anything goes" is on the way out. Reason can take us a long way, but it has limits. Let us embrace post-postmodernism-and pray for a better name. ...read more.