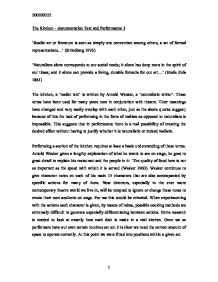 The kitchen, a 'realist text' is written by Arnold Wesker, a 'naturalistic writer'.

The Kitchen - documentation Text and Performance 3 'Realist art or literature is seen as simply one convention among others, a set of formal representations...' (Strindberg 1976) 'Naturalism alone corresponds to our social needs; it alone has deep roots in the spirit of our times; and it alone can provide a living, durable formula for our art...' (Emile Zola 1881) The kitchen, a 'realist text' is written by Arnold Wesker, a 'naturalistic writer'. These terms have been used for many years now in conjunction with theatre. Their meanings have changed and very easily overlap with each other, just as the above quotes suggest; because of this the task of performing in the form of realism as opposed to naturalism is impossible. This suggests that in performance there is a real possibility of creating the desired effect without having to justify whether it is naturalistic or indeed realistic. Performing a section of the kitchen requires at least a basic understanding of these terms. Arnold Wesker gives a lengthy explanation of what he wants to see on stage, he goes to great detail to explain his restaurant and the people in it: 'The quality of food here is not so important as the speed with which it is served (Wesker 1960). Wesker continues to give character notes on each of his main 15 characters that are also accompanied by specific actions for many of them. ...read more.

Maniacal is something that is a clear desire for Wesker in this play. The popular representation of chefs and cooks even now is that they are all slightly insane and putting them in a kitchen excites this factor. Wesker even makes testimony to this within the text of 'the kitchen' when Dimitri comments: 'Listen, you put a man in the plate room all day... what else there is for him to do - he wants to fight.' As a performer this theme is certainly achievable just by use of voice. Varying a regular pace and volume level is just two ways in which to change the way lines are said to sound more crazy. However this we found was no where near enough to produce an atmosphere that was right for this performance. We looked at everything the pace of the movements, the sounds that are created through mime. We even added to mime real cooking utensils; this gave another variable that could be affected. The final performance consisted of these utensils that acted as an instrument that could be manipulated to yield a more rampant effect. The bashing of a saucepan with a wooden spoon holds a certain quality that can be used to build a beat. We had already decided to use a tape recording of an oven fumigator to set a permanent noise that would indeed be heard in a real kitchen. ...read more.

They are on their toes and shouting out orders which of course the cooks have to respond to vocally and physically. There were high intensity moments, for instance: Violet: I've never worked like this before, never never. Peter: Too old, too old my sweetheart. Go home old woman - for the young this work - go home. At this point we used our performance time to show a rehearsal technique, and carried on performing but as improvisation reacting to waitress orders. The more orders the faster and more frantic it got. The Kitchen is a text that is as much a compositional piece as an accurate representation of a fully operational kitchen and we tried to show this. The character's and their personal description given by Wesker is important but not nearly as much as his comments and detailing of atmosphere and general running of the 'Trivoli' restaurant. Obviously what our group created was working progress and to improve it would be to add more detail and choreography to everything including set and character exchanges. Our task was to create a realist performance, 'A play should be written in which people arrive, go away, have dinner, talk about the weather, play cards. Life must be exactly as it is and people as they are.' (Chekhov, A.). The problems we occurred are summed up with Wesker's comment: 'the artist is dealing with what is absurd in reality in a naturalistic form' (Wesker, A. ...read more.