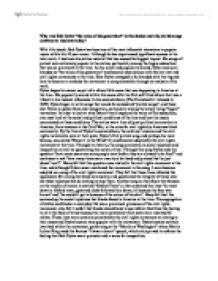 Why was Bob Dylan &quot;the voice of his generation&quot; in the sixties and why do his songs continue to resonate today?

Why was Bob Dylan "the voice of his generation" in the sixties and why do his songs continue to resonate today? With little doubt, Bob Dylan has been one of the most influential characters in popular music within his 40 year career. Although he has experienced significant success in his later work, it has been his sixties material that has caused the biggest impact. His songs of protest were extremely popular in the sixties, particularly among the hippie subculture that was so prominent at the time. As his career and popularity soared, Dylan was soon branded as "the voice of his generation" and became synonymous with the anti-war and civil rights movements at the time. How Dylan managed to be branded with this tag and how he became to embody the movement is comprehensible through an analysis of his work. Dylan began his career as part of a vibrant folk scene that was happening in America at the time. His popularity soared within this scene after his first self-titled album that was a tribute to his musical influences. In his second album, (The Freewheelin' released in 1963) Dylan began to write songs that would be considered "protest songs", and these shot Dylan to global fame and recognition, particularly among the newly rising "hippie" movement. ...read more.

Dylan then released an album called "The Times They Are A-Changin'" which many regard as the finest protest album of all time. The opening song also called "The Times They Are A-Changin' (5) became a generational anthem. The song is based on the principle that the movement for social change is inevitable and that history will eventually conform to morality. Dylan writes for "senators and congressmen please head the call" and continues to add "there's a battle outside raging, we will soon shake your windows and rattle your walls for the times they are a-changing". This line in particular is very provocative, describing an almost revolutionary image, an image that the young rebellious youth arguably related to. The song never mentions a specific rebellion or situation, yet it was certainly poignant at the time when a rebellious youth threatened the status quo which gave rise to the counter-hegemonic subculture of the hippie movement. This hippie movement treated Dylan as a prophet of sorts, constantly relating to the messages in his music. Dylan's song from the same album entitled "With God on Our Side" (6) was a deconstruction of American nationalist fundamentalism, where he comments on the particular stages of America's development from the war on the Indians to the present day. ...read more.

"A Hard Rains A-Gonna Fall" could be applied to the current fear of attack with biological weapons while "Masters of War" could be applied to the hatred of the Iraq war. The fact that Dylan never referenced his songs to particular events is perhaps the reason that they still continue to resonate today. His songs were often against war, hunger, oppression and inequalities, and as long as these particular grievances still exist, then his songs will always have new meaning. His songs contained a certain ideology, and as long as these ideologies still exist in society then his songs will remain popular. Today's anti-war and global justice movements have similarities to the movements of the sixties and have given Dylan's music a new home and a new resonance. While the current events of the present day give new meaning to Dylan's sometimes apocalyptic songs, it is important to realise the power of music as a medium for protest. (1) Bob Dylan, The Freewheelin' Bob Dylan, (Columbia records, Sony Music Entertainment Inc. 1963) Track 1 (2) Ibid. Track 9 (3) Ibid Track 3 (4) Ibid Track 6 (5) Bob Dylan, The Times They Are A-Changin', (Columbia records, Sony Music Entertainment Inc. 1964) Track 1 (6) Ibid Track 3 (7) www.contactmusic.com/new/xmlfeed.nsf/mndwebpages/dylan (8) www.rollingstone.com/poydylanbob (9) www.muraldirectory.co.uk, mural number 216 ...read more.