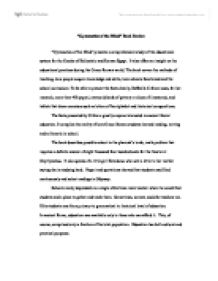 Gymnastics of the Mind Book Review

"Gymnastics of the Mind" Book Review "Gymnastics of the Mind" presents a comprehensive study of the educational system for the Greeks of Hellenistic and Roman Egypt. It also offers an insight on the educational practices during the Greco-Roman world. The book covers the methods of teaching, how people acquire knowledge and skills, how schools functioned and the school curriculum. To be able to present the facts clearly, Raffaella Cribiore uses, for her research, more than 400 papyri, ostraca (sherds of pottery or slices of limestone), and tablets that show exercises such as letters of the alphabet and rhetorical compositions. The facts presented by Cribiore greatly anyone interested in ancient liberal education. It compiles the reality of how Greco-Roman students learned reading, writing and arithmetic in school. The book describes possible school in the pharoah's tomb, math problem that requires a definite answer of eight thousand four hundred seats for the theater at Oxyrhynchus. ...read more.

Writing comes first in elementary teaching. The children were first taught to copy letters and phrases even without knowing what they were copying. Pronouncing syllables came next. Then they learned to understand words and phrases prepared by the teacher. Those who can read an entire sentence were considered advanced in skill. The words in ancient books were not separated, there were no lower-case letters and punctuation was rarely used. For students who could read, she could copy texts and take dictation. In Ancient Egypt, women were considered equal to men as far as the law was concerned. This is evident in the fact that parents sometimes sent their daughters, aside from their sons, to attend these classes. Most of the teachers were men but there were women teachers too. Women in ancient Egypt were more fortunate than their Greek and Roman counterparts because of the relative freedom and power they exercised in the Egyptian society. ...read more.

Also, Egyptians considered love as important parts of marriage. They were not just looking for care-takers. Athenians were horrified of the freedom enjoyed by the Egyptian. This led many to wonder how women use this advantage to acquire high status employment and literacy. The answer seems to show that the freedom contributed very little to the development of women. As shown in the book 'Gymnastics of the Mind'. The Mistress of the House was tasked with running the home which was rather a formidable responsibility. The wife must manage a number of servants and keep track of inventories. Women served in places such as temples that did not require literacy. They never achieved prominence in the government. From the book Gymnastics of the Mind, it is safe to assume that some women were literate but they may not had the opportunity to use what they learned because the responsibilities of running the house could have taken up most of their time. ...read more.