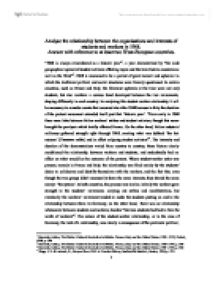 Analyse the relationship between the organisations and interests of students and workers in 1968.

Analyse the relationship between the organisations and interests of students and workers in 1968. Answer with reference to at least two West-European countries. "1968 is always remembered as a historic year"1, a year characterized by "the wide geographical spread of student activism affecting Japan and the Iron Curtain countries as well as the West"2. 1968 is renowned to be a period of great turmoil and upheaval in which the traditional political and social structures were fiercely questioned. In certain countries, such as France and Italy, the foremost agitators at the time were not only students, but also workers: a curious bond developed between the two movements, shaping differently in each country. In analysing this student-worker relationship it will be necessary to consider events that occurred also after 1968 because in Italy the duration of the protest movement extended itself past that 'historic year': "From early in 1968 there were links between Italian workers' strikes and student activism, though this never brought the paralysis which briefly affected France. On the other hand, Italian industrial militancy gathered strength right through 1969, creating what was dubbed 'the hot autumn' (l'autunno caldo) and in effect eclipsing student activism"3. The intensity and duration of the demonstrations varied from country to country; these factors clearly conditioned the relationship between workers and students, and undoubtedly had an effect on what would be the outcome of the protest. Where student-worker unity was present, namely in France and Italy, the relationship was fired mainly by the students' desire to collaborate and identify themselves with the workers, and the fact that, even though the two groups didn't necessarily share the same interests, they shared the same enemy: 'the system'. In both countries, the process was similar, initially the workers gave strength to the students' movement, carrying out strikes and manifestations, but eventually the workers' movement tended to outdo the students putting an end to the relationship between them. ...read more.

The French student-worker collaboration, even if considered weak compared to the one in Italy, was based on shared interests such as the same aversion towards the French Communist Party, the same desire for a "greater delegation of authority - the right of comanagement"25 and a common enemy: Charles de Gaulle. The students were annoyed by "de Gaulle's concentration on foreign affairs and his failure to respond to the often deplorable conditions in the universities"26, whilst "to protesting workers and intellectuals, the Gaullist regime seemed the prime example of an over bureaucratized, technocratic, soulless institution"27. Therefore the relationship between the student movement and the working movement was one founded on a general discontent of conditions and the common desire to democratise society and institutions . These common interests are underlined by a speech from the CFDT: "The student struggle to democratise the university and the workers' struggle to democratise industry are one and the same. The constraints and institutions against which the students are rebelling are paralleled by even more intolerable forms in factories, or worksites, in offices and workshops...Industrial and administrative monarchy must be replaced by democratic institutions based on self-management"28. An emblematic event that marked "a temporary unity between unions and students"29 was a great strike called by the trade unions on 13 May: a nation-wide general strike, supported by 30-40% of the workers30, university and secondary school students, professional organizations and a substantial portion of the general public. It was a significant episode, that gave a hope for a student-worker unity and indicated that the trade unions had been able to put their distrust of students to one side, nevertheless it wasn't enough to build a solid unity between the two organisations. Why wasn't the relationship between student movement and workers movement in France not as profound as in Italy? We could blame it on the "extraordinary compression"31 of the 1968 events, and suggest that things went too quickly in order for the two movements to build a solid bond. ...read more.

These factors suggest a particular predisposition for a strong student-worker alliance in Italy, and as suggested by Lumley, this working class "openness to 'outside' ideas and organization has historical and structural explanations"44. On the other, due to its particular social history and structure, concentrated on a strong class-consciousness, France lacked this 'openness', and consequently had a weaker relationship between students and workers. Another essential factor which caused a strong relationship between the Italian student and workers' movements is spontaneity. However, with the advent of revolutionary groups, which implied organisation, the student movement's autonomy was undermined, until the student issues were finally "subordinated to strategies relating to the industrial working class"45. The trade unions' decision "to 'ride the tiger' of militancy"46, confimed the fact that, the greater the influence of the political institutions and trade unions, the weaker the relationship between students and workers will be: "long-standing loyalties to the traditional parties of the left and to the trade unions made it difficult for the revolutionary groups to make progress"47. The end of the Italian student-worker relationship proves that even though there are particular predispositions for a strong student-worker unity lying in the country's social, political and economical structure, this relationship is precarious, because it is mainly the result of an unusual historical situation. As suggested by Lumley48, these social groups (middle-class students and working class), would not naturally encounter, and the German events, where there was no unity between workers and students, prove this thesis. Even though the two groups share the same ideals, the utopian and radical interests of the student movement clash with the workers' desire for concrete results and necessity to maintain a family and a job. Therefore, even though the combined struggles of workers and students marked an extraordinary period of history, it was a relationship doomed to end mainly due to any incompatibility between the higher aspirations of its members. ...read more.