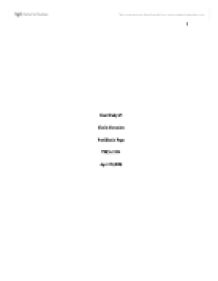 Ethan has blue eyes, dirty blonde hair, and is about to celebrate his first birthday at the end of this month.  He weighs twenty four pounds and measures twenty eight inches in length, making his physique appear big for an infant his age.  He lives with his mother and his three year old brother in a gated three story condo in Bellaire.  The home is very chaotic but extremely kid- friendly.  Even though it looks like the kids have free reign to do whatever they want, looking closer you become aware that there are child proof areas in which the children can play freely.  Plus, the gates for the staircases make sure they don’t get into the places they are not supposed to.  By doing so she is making their home somewhere that encourages free play and the exploration of things all around him easily accessible.

Development varies.  One- year- olds make dramatic physical progress, typically moving from crawling to running in about twenty months.  Sometimes they hold their hands out to the side or poke their bellies out for balance.  Sometimes their stagger is a bit awkward and clumsy, and falls are common.  One- year- olds also improve in hand and finger coordination, but skills at this age are still immature, so they fumble and drop objects frequently.(1 )  According to the text, some of the physical milestones that a child should have accomplished by twelve months are: approaches adult like sleep-wake schedule (176), sits alone, crawls, and walks (188), shows refined pincer grasp (191), “screens out” sounds not used  in own language; perceives meaningful speech (194) (Berk, pg.290).  Ethan’s physical development may differ from these estimates and still be within normal ranges.

During most of the observation, he was confined to his rocker/swing.  His mother shyly admits that being a single, working parent with two small children can stretch her nerves pretty thin.  Therefore, the decision to have him in a swing (for as long as he will allow it) makes it easier to handle all of the balls that she has to juggle meanwhile insuring the safety of the baby.  While in his swing, Ethan was able to hold onto his bottle with both hands while drinking with his head tilted up, but as soon as his head faced downward.  So did his hands, throwing his bottle onto the floor.  This happened a few times before Shonna replied, “Okay. I’m tired of playing that game”, and switched out the bottle for a few animal crackers.  He used his “pincer” grasp (thumb and fore finger working together) to pick up the food and bring it to the mouth.  His brother would play catch with him periodically.  Ethan would grasp the ball when it landed in his chest area and would release it in the same downward motion as the bottle.  Once dinnertime was over it was finally time for Ethan to demonstrate his gross motor skills.  Free from the swing, he crawled from toy to toy not knowing exactly which one his older brother would actually let him keep for more than two seconds.  After a few moments of sitting down without support, he also confirmed that with the help of holding onto furniture, he was able to pull himself up and cruise along the shape of the couch.

Unable to access the following information myself, his mother informed me that Ethan has had no serious health problems to speak of to date.  He depends solely on Shonna for most aspects of care.  He has four upper teeth and two on the bottom.  His diet includes formula, finger snacks, but it mainly consists of bottled baby food.  She also expressed that when it comes to food, “He is not picky”.  His naps are still often, but shorter than ever before.

Much of modern cognitive development theory stems from the work of the Swiss psychologist, Jean Piaget.  Piaget divided the sensorimotor stage into six stages.  In stage 5 (months 12 to 18), toddlers explore cause-and-effect relationships by intentionally manipulating causes to produce novel effects (Berk pg.216). For example, Ethan may attempt to make his mom smile by waving his hands at her.  A child at his age explores the world with eyes and ears and begins to explore objects with hands, feet, and especially their mouth.  Their interest in appearing and disappearing (objects and people) – develops ‘object permanence’.  Shonna showed me that Ethan is capable of remembering people by merely saying, “Where’s brother Austin”? At that point in time he would look around the room for his brother and smile, point/clap, and giggle as soon as he saw Austin- as if to be saying, “There he is”!  Another example of language comprehension was when it was time for me to leave Shonna told him, “She’s going bye-bye Ethan. Tell her bye-bye,” and he picked up his whole arm and started swing it around imitating what his mother was doing.  At twelve months, the average child understands simple directions used in routine situations (e.g. , “Stop that.”, “Spit it out.”, “Please sit still, sit down, or stand up.”),  and distinguishes between a positive and negative tone in voice.  Ethan displayed all of these things during the observation.  He also demonstrated that he likes to look at books and inspect the pictures, but at the moment his mother says that his attention span for stories is way too short and that he is easily distracted.  One-year-olds do not show awareness of print at this age.  When given a color, Ethan makes circular, continuous scribbles with occasional straight lines added.  The activities he chooses are honestly anything and everything in his way that happen to grab his attention.  Compared to other children his age, his cognitive skills display normal development.

The significance of social and emotional development is seen in every area of a child’s life.  One-year-olds are just learning to recognize and manage their feelings.  They experience a wide range of emotions and have tantrums when they are tired and frustrated.  With help from an adult, can begin to use strategies to control emotional expression (e.g. goes to get his binky when upset so he can calm down).   They may also respond to conflict by hitting, biting, screaming, screaming, or crying.  Ethan shows acute pleasure when his mother is nearby.  Children at this stage are keenly observant of mothers’ emotional reactions.  He checks her facial expression (e.g. considers climbing up the ladder at the playground, but first looks back at her face for encouragement or warning).  It was let known that when a conflict occurs with his brother, Ethan often acts out emotionally, and immediately calms down when their mother helps resolve the conflict.  The child seems generally happy, because there aren’t many children his age that will willingly nor happily stay in their swing for that amount of time.  He was content the whole time by himself.  The only time he expressed any stress was when big brother would go over to bother him and jump right on him while in the swing.

The only family matters to speak of are that his parents are newly divorced.  His father still lives in Houston and sees them every Wednesday and gets to have them over night every other weekend.  Both of his parents are doctors, so the family is in no way in financial hardship.  Unsure of how bitter the parents are in front of the children, but if they are civil there should be no reason considering the child’s age that this should effect the child’s development.

I believe that to no fault of his own he happened to be the second child for this woman and according to statements that she made; she wasn’t going to raise another spoiled child.  She “learned her lesson,” as she would say.  She now doesn’t run to every little cry or whimper that Ethan makes, nor does she carry him all the time.  She lets him figure a lot more stuff on his own.  This could be a good thing or a bad thing.  As of now it seems to be all fine.  Ethan showed no kind of stress or neglect the whole time I was there.  His progress in all the domains of development let me know that he is progressing similar to children his age.