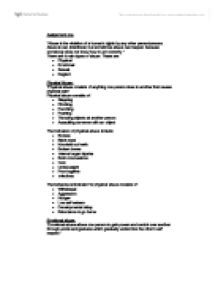 Assignment one "Abuse is the violation of a human's rights by any other person/persons. Abuse is can intentional, but sometimes abuse can happen because somebody does not know how to act correctly." There are 4 main types of abuse. These are: * Physical * Emotional * Sexual * Neglect Physical Abuse: "Physical abuse consists of anything one person does to another that causes physical pain" Physical abuse consists of: * Slapping * Pinching * Punching * Pushing * Throwing objects at another person * Assaulting someone with an object The indicators of physical abuse include: * Bruises * Black eyes * Knocked out teeth * Broken bones * Internal organ injuries * Brain concussions * Cuts * Underweight * Poor hygiene * Infections The behavioural indicator for physical abuse consists of: * Withdrawal * Aggression * Hunger * Low self-esteem * Developmental delay * Reluctance to go home Emotional abuse: "Emotional abuse allows one person to gain power and control over another through words and gestures which gradually undermine the other's self respect." Emotional abuse is more difficult to spot because it does not have as many physical aspects to it as physical abuse. However, the change in a person's behaviour when they are being emotionally abused is very recognisable. The behavioural indicator for emotional abuse consists of: * Blaming * Accusing * Yelling * Screaming * Making threats * Degrading insults * Destructive criticism * Sulking * Manipulation * Neglecting * Not listening * Withholding affection * Depression or Anxiety ...read more.

The fourth factor is that no effective 'lifeline,' or line of communication to sources of aid, exists at the moment of crisis." The medical theory is important for us to understand, because it helps us understand more about the physical effects of abuse that is visible to the eye. However to understand the medical theory fully we have to also look at the attachment theory. The attachment theory is about the psychological tendency to seek closeness to another person, to feel secure when that person is present, and to feel anxious when that person is absent. The medical theory is closely linked with the attachment theory. John Bowlby, who came up with the theory, linked to Kempe's because of emotional, behavioural, mental-health and abusing problems, which children had after being abused, for a long period of time. Bowlby linked his theory to Kempe's theory because he looked at the long-term effects on the development of children who had been separated from their parents. This gave them the result of abuse and neglect. In contrast to the medical theory is the feminist theory, because it only explains about the sexual side of abuse from a woman's point of view: a woman called Beatrix Campbell. Beatrix Campbell was a British campaigning journalist and author and considered herself a communist feminist. She did a lot of work on the Cleveland case which was very male-dominated. ...read more.

Illness, poverty and unemployment were all reasons why people went on to abuse children. However Donileen R. Loseke wrote in her book 'through a sociological Lens' that child abuse depends on not what state the society you live in is like, but the area of family and friends in which you live in. It is important to mention the sociological theory because it brings in understanding from outside our minds that we may have never known. In conclusion there are many people who debate that only one of these theories are important but, in my opinion, they are all as important as one another. People think that only one theory is important, this is because they only see one or two types of abuse. Then we assume that this is the most important type of abuse and need to do everything possible to stop it. However, all are important because they combine to give us a more precise view of child abuse in today's society. Overall, the theories and models that we have looked at bring a different element of understanding to abuse and a sense of realising when, where and how abuse happens. Therefore all the theories are useful in evaluating and furthering the knowledge and investigation into the realms of child abuse. BIBLOGRAPHY Physical Abuse - * http://www.mamashealth.com/abuse/physical.asp Definition of Abuse - * http://www.publicguardian.gov.uk/concerns/what-is-abuse.htm Sexual Abuse - * http://www.nspcc.org.uk/help-and-advice/worried-about-a-child/talking-to-our-experts/types-of-child-abuse/sexual-abuse-definition/sexual-abuse_wda75436.htm * http://www.findcounseling.com/journal/child-abuse/physical-child-abuse.html * http://www.kidscape.org.uk/professionals/childabuse.shtml Emotional Abuse - * http://www.counselling-directory.org.uk/mental.html Neglect - * http://www.nspcc.org.uk/help-and-advice/worried-about-a-child/talking-to-our-experts/types-of-child-abuse/neglect-definition/neglect_wda75435.html * http://www.helpguide.org/mental/child_abuse_physical_emotional_sexual_neglect.htm Psychological theory - * http://www.ncbi.nlm.nih.gov/pubmed/870916 Feminist theory - * http://www.saff.ukhq.co.uk/bcamp.htm * http://en.wikipedia.org/wiki/Beatrix_Campbell Sociological theory - * http://www.corwin.com/upm-data/5159_Loseke_Rev_I_Proof_Chapter_3.pdf ...read more.