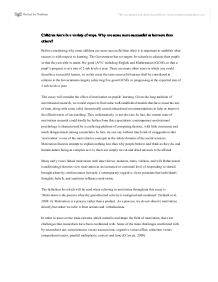 Children learn in a variety of ways. Why are some more successful as learners than others?

Children learn in a variety of ways. Why are some more successful as learners than others? Before considering why some children are more successful than other it is important to establish what success is with respect to learning. The Government has set targets for schools to educate their pupils so that they are able to attain five good (A*-C including English and Mathematics) GCSEs or that a pupil's progress is at a rate of 2 sub levels a year. There are many other ways in which you could describe a successful learner, so in this essay the term successful learner shall be considered in relation to the Governments targets; achieving five good GCSEs or progressing at the expected rate of 2 sub levels a year. This essay will consider the effect of motivation on pupils' learning. Given the long tradition of motivational research, we would expect to find some well-established models that have stood the test of time, along with some solid, theoretically sound educational recommendations to help us improve the effectiveness of our teaching. This, unfortunately, is not the case. In fact, the current state of motivation research could hardly be further from this expectation: contemporary motivational psychology is characterised by a confusing plethora of competing theories, with little consensus and much disagreement among researchers. In fact, we can say without much risk of exaggeration that 'motivation' is one of the most elusive concepts in the whole domain of the social sciences. Motivation theories attempt to explain nothing less than why people behave and think as they do, and human nature being as complex as it is, there are simply no cut and dried answers to be offered. Many early views linked motivation with inner forces: instincts, traits, volition, and will. Behavioural (conditioning) theories view motivation as an increased or continual level of responding to stimuli brought about by reinforcement (reward). Contemporary cognitive views postulate that individuals' thoughts, beliefs, and emotions influence motivation. ...read more.

A third motivational index is persistence, or time spent on a task. Students motivated to learn are more likely to persist, especially when they encounter obstacles. Persistence is important because much learning takes time and success may not readily occur. Persistence relates directly to the sustaining feature of motivation, and greater persistence leads to higher accomplishments. Persistence is commonly used by researchers as a measure of motivation. Zimmerman and Ringle (1981) had children observe a model unsuccessfully attempt to solve a puzzle for either a long or short time while verbalizing statements of confidence or pessimism, after which children attempted to solve the puzzle themselves. Children who observed the high-persistent model worked longer on the task than the children exposed to the low-persistent model, and children who observed the confident model persisted longer than those who observed the pessimistic model. As with effort, the usefulness of persistence as a motivational measure is limited by skill level. As students' skills improve, they should be able to perform well in less time. Persistence is most meaningful during learning and when students encounter obstacles. Finally, student achievement may be viewed as an index of motivation. Students who choose to engage in a task, expend effort and persist are likely to achieve at higher levels (Pintrich & Schrauben, 1992; Schunk, 1995). Many research studies obtain positive relations between achievement and motivational indexes of choice, effort and persistence (Pintrich, 2003). Schunk (1983a) found that the more arithmetic problems children completed during class sessions (which reflected effort and persistence), the more problems they solved correctly on the posttest (a measure of achievement). Dweck (2000) writes about, 'four beliefs and four truths about ability success, praise and confidence' and how they interact to promote adaptive motivation. Dweck (2000) talks about students who are highly skilled are worried about failure, and the most likely to question their ability and to wilt when they hit obstacles. ...read more.

When children who have not experienced difficult problems in mathematics encounter a problem that cannot be solved in a routine fashion, they may have their confidence shattered unless they believe that occasional mistakes are a part of learning mathematics. In conclusion, motivation is of great importance to education, yet it remains an elusive topic. Many interactions have been discovered between level of motivation and achievement. Each individual is motivated differently and their level of motivation can be influenced by many external factors. What teachers need to be aware of the different models of motivation, for instance the attribution theory, a teacher can attribute a pupil's success to stable factors such as ability and failings to changeable factors such as effort, and therefore in future the pupil will know they can be a successful learner if they work harder. However educators will have to be careful not to tell a low achieving pupil to work harder who is already working hard, as they will then feel incapable and attribute their failure to their ability. This could lead to the pupil being disengaged from their learning. Motivation affects all classroom activities because it can influence learning of new behaviours and performance of previously learnt behaviours. Learning and performance are related in a reciprocal fashion to motivation because motivation can affect learning and behaviour and one's learning and action as can influence subsequent task motivation. It needs to be taken into consideration that for each individual there are other variables outside of motivation which will also affect their progress as learners; Special Educational Needs, teaching models, family support and many others. Some thought needs to be taken with these variables when assessing successful learners and relating their success to motivation as it is will never be the case where motivation is the only enforcer. Although many research theories about motivation contradict each other, a learner who is persistent and perseveres in the face of adversity is likely to be a successful learner, as learning tends to require sustained physical or mental effort. ...read more.