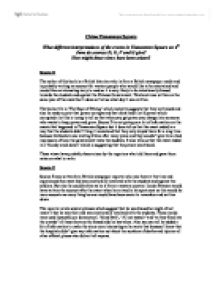 China-Tiananmen Square What different interpretations of the events in Tiananmen Square on 4th June do sources D, E, F and G give? How might these views have been arisen? Source D The author of this book is a British historian who is from a British newspaper media and is probably writing an account for western people who would like to be entertained and would like an interesting story to read so it is very likely to be intentionally biased towards the students and against the Chinese Government. This book was written on the same year of the event but it does not tell us what day it was written. The books title is 'The Rape of Peking' which instantly suggests that they are biased and also he made a point that power corrupts and that china had a lot if power which corrupted a lot this is trying to tell us that when you get power you change into someone who wants to keep power and grow. ...read more.

This source shows a little about the events with no detail of what happened and these views have probably been arisen by the emotional involvement of the news reporter with the students. Source F This source was written by an American historian called John Bradley and in this source he included another statement which was spoken by a Chinese government official. The two sources have both completely different people who are both possibly bias with different views and on different sides. The historian is meant to be writing a factual article which was a year after the event this might have helped as he would have had enough time to gather different sources from different backgrounds and balance them out and he would of not of been emotionally involved. He might have written this trying to be neutral and not supporting any side but the information he gathered would have probably mostly be from the western countries which are bias against china. The historians language was clearly showing a sign of being biased as he used language like, 'the soldiers charged the students, using their guns', 'Anyone ...read more.

The language used is suggesting that the students were the trouble makers who had to be asked to leave and were scared by the consequences that they could of faced, also it says that no one was killed in the whole operation, but I know from a video that I saw, that many students were killed and the soldiers gave the students only very little chance to escape. This sources is not very useful in telling us the events of Tiananmen Square as the information is not reliable as the government would of changed the figures and the stories so that they would look good and correct in every step of the action. Also this story does tell us quiet a lot about the events of Tiananmen Square in detail but the information is not reliable which makes it useless in seeing the real event of what happened. The only thing that this source is useful is in telling us how the government changed the information and tried to play with the peoples mind. These views might have been arisen by the government to retaliate all the information and stories which have been said about them. ...read more.