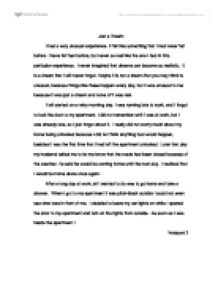 Just a Dream I had a very unusual experience. It felt like something that I had never felt before. I have felt fear before, but never so real like the one I had in this particular experience. I never imagined that dreams can become so realistic. It is a dream that I will never forget. Maybe it is not a dream that you may think is unusual, because things like these happen every day, but it was unusual to me because it was just a dream and none of it was real. It all started on a rainy morning day. I was running late to work, and I forgot to lock the door to my apartment. I did not remember until I was at work, but I was already late, so I just forgot about it. I really did not worry much about my home being unlocked because I did not think anything bad would happen, besides it was the first time that I had left the apartment unlocked. ...read more.

Then I started hearing noises, I still thought that maybe it was just all in my head. All of a sudden I heard something break in the kitchen, that's when I knew that it was not just my mind. There was really someone inside. Filled with fear I ran to the room to try to find the gun that my husband had hidden in the closet, but I could not find it. Whoever was inside my apartment knew that I had heard him/her. I was so scared, and I did not know what to do. I got under the bed hoping that the intruder would not see me. I had horrifying thoughts in my mind, and at the same time I asked myself if this person that was in my apartment was there to steal or to kill me. Moments later, I heard footsteps heading to the room where I was hiding. ...read more.

With an exhausted voice he asked, "Are you ready to die?" I was speechless and without a doubt in my mind I knew this heartless man was about to kill me. While he was pointing his gun to my head I was having flashbacks of my life. Then when he was about to pull the trigger I woke up from that horrible nightmare that felt so real. I was breathing so hard, I felt as if I had actually been running. My heart was pounding so hard that it felt like it was going to fall off. I had tears in my eyes, and I was so grateful that it was all just a dream. Overall that has been my most unusual experience ever. I have had nightmares before, but I had never had a nightmare that felt as if I had experienced in real life. This nightmare made me realize that anything can happen when you least expect it. I always here in the news about thieves killing people in their homes, but I guess I never realized the fear they go through. ...read more.