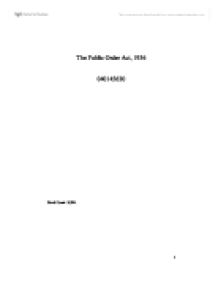 Dissertation in the Public Order Act 1936

The Public Order Act, 1936 040145620 Word Count: 9,995. Contents Introduction 1 1 The Public Order Act, 1936: the political response 5 2 The Public Order Act, 1936: the individual response 17 3 The Public Order Act, 1936: police enforcement 25 Conclusion 33 Bibliography 34 Introduction The motivation to engage with this project stems primarily from the fact that the Public Order Act does not elicit a great deal of coverage in the majority of academic books pertaining to political extremism in the inter-war period, despite the fact that the history of the British Union of Fascists is largely inseparable from issues of political skirmishing and public order. In very few books the Act receives a chapter, in the majority it receives even less. In my research I have not uncovered any new material or any new historiographical contentions, nor do I seek to exculpate the British Union of Fascists (BUF) from any negative stereotypes to which they are bound. My initial inclination to research this project was because I felt that something that was such a departure from the traditional British political ethos of liberalism that had increased executive power at individual expense, and the reaction that it garnered, deserved a greater deal of exposure. Indeed, Lewis concludes that the National Governments 'more notorious legislative and procedural innovations have left a stain upon the record of civil liberties.'1 Furthermore in light of the current political context I felt that it would be very fitting to investigate a topic that pertained to the invasion of and reduction of civil liberties. It is often neglected that the actively anti-Fascist NCCL were amongst the most explicit critics of the Act. To that point, the Public Order Act is very useable history. This dissertation, through three chapters, will analyse briefly the Act itself, and more deeply, the British Union's response both politically and individually, and consequently the effect of the Act through an array of primary sources, thereby crafting a slightly more narrow account perhaps than is to be found in the majority of academic material. ...read more.

2 The Public Order Act, 1936: the individual response This chapter of the project is concerned with the individual responses to the Public Order Act. There is only so much value that the historian can gain from the analysis of a political response because a political response is uniform and tends only to compound the stereotypical image of that party. That is not to disregard the value of the previous chapter in any sense but the historian must be aware of the limitations of the sources he will employ. To that point this chapter is more of a social chapter than the previous but the method employed has no basis in sociology or Marxist interpretations. The methodology of this chapter is conceived through the analysis of primary material again from the Robert Saunders Collection, therefore history from below and also oral history. As aforementioned in the first chapter, London was more heavily affected from the Public Order Act because it held far more processions and meetings there than anywhere else in the country. Thus when one employs sources such as from the Saunders Collection, which is the only largely surviving District archive left in the United Kingdom, one must realise that the impact felt in Dorset would have been a lot less severe than in London, but that at the same time one cannot fully qualify that due to lack of available sources. The response of Saunders to the Act then does not reflect the attitudes of all BUF individuals, but what it does demonstrate is that there could be no homogenous individual fascist response to the Public Order Act as there was no specific national political response that encompassed all branches either. Significantly during December whilst the Act is being planned and passed through the appropriate channels, Saunders receives three pieces of correspondence from local branch members warning him not to wear uniform to future meetings as it is likely to be banned. ...read more.

the records of borough and county constabularies it is very difficult to fully qualify that conclusion as being reflective of the entire State, thus any assertions that are reached must be presented cautiously. Ultimately the historian recognises that the attitudes reflected from the Metropolitan Police files do not reflect the attitudes of all the nations' policemen Conclusion The Public Order Act has elicited very little historiographical debate since its inception. This project has not uncovered any new material either, but that was not the motivation of this historian. The emphasis of this piece was to establish that there could be no homogenous response to the Act both from individual Fascists and also the authorities. The first chapter revealed that due to the weak centre-periphery leadership of the BUF there could be no unified political response that bound the entire nation either. It also revealed the changing attitudes of the BUF over time too. The second chapter concerned the individual responses of BUF members and thus was more of a social work. It elucidated how different branches reacted differently to the Act and how that was forced not only by municipal differences but also by a weak central leadership. Finally the third chapter reflected upon a parallel between individual Fascist members and individual police members. There was no uniform response. It also commented upon the enforcement of the Act and how this centred mainly upon London. The conclusion reached, albeit tentatively, was that fascism was not homogenous through Britain, neither then was the Movement's response to the Public Order Act. A rather obvious conclusion, one might suggest, but one that the objective historian could not attain without research. Speculation is not the ally of the historian. Unfortunately due to a lack of sources this work could not be as broad as it desired, nonetheless, the objective of this topic has been achieved, not to contend or substantiate contemporary work but to engage with a topic of personal interest and extend that onto the historical page. ...read more.