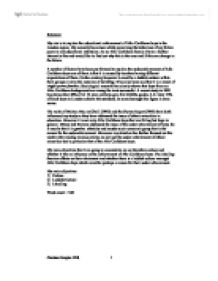 Explore the educational achievement of Afro-Caribbean boys in the London region.

Rationale My aim is to explore the educational achievement of Afro-Caribbean boys in the London region. My curiosity has arisen whilst perceiving the behaviour of my fellow peers in my educational institution. As an Afro-Caribbean female I have a further interest in this and would like to find out why this is the case and if this can change in the future. A number of factors have been put forward to explain the underachievement of Afro Caribbean boys one of them is that it is caused by teachers having different expectations of them. On the contrary however it could be a laddish culture within their groups or even the outcome of labelling. It has also been said that it is a result of single-parent families. Sociological research has clearly shown that boys from an Afro-Caribbean background are among the least successful. A recent study in 2001 has shown that 48% of all 16-year-old boys gain five GCSEs grades A-E. Only 13% of black boys in London achieve this standard. In some borough this figure is even worse. The work of Mairtan Mac an Ghaill (1992) and the Swann Report (1985) have both influenced my study as they have addressed the issue of ethnic minorities in education. However it is not only Afro Caribbean boys that are failing but boys in general. Mitsos and Browne addressed the issue of the under achievement of boys. So it may be that it is gender, ethnicity and maybe socio-economic group that is the reason for the underachievement. Moreover my attention has further focused on this matter after reading various articles on not just the under achievement of ethnic minorities but in particular that of the Afro Caribbean boys. My main objectives that I am going to concentrate on are therefore culture and whether it has an influence on the achievement of Afro Caribbean boys. The labelling theories effects on their attainment and whether there is a laddish culture amongst Afro Caribbean boys which could be perhaps a reason for their under achievement. ...read more.

As I am an Afro-Caribbean I should be able to obtain the confidence of the students. However it may become difficult to not lead them into answering questions in a particular way. There is a predicament with the fact that at times the males could be telling me untruths as boys have the tendencies to embellish at times to seem "rugged". This could effect the validity if my data. Time is going to be a supplementary problem as it is going to be very time consuming listening to the taped interviews. The interviews may also be quite prolonged, as they are quite informal. I will overcome this by only asking relevant information whilst probing. I need to take into the consideration that I am an A level student and therefore I have limited time to undergo my study. My study will be more representative of the sixth form college than society as a whole. Word Count = 761 Evidence I used semi-structured interviews to gather my research. I asked each person 17 questions. My evidence has both supported and challenged the contextual evidence that had been researched. One of the questions asked on my questionnaire was "What do you think influenced your achievement at GCSE" 15 of my respondents said that their parent or guardian had an influence on their achievement due to their concern for their education. Many felt that if their parents had not taken an interest they would have achieved much less. This challenges the view that many Afro Caribbean children coming from one-parent families has a negative outcome education wise. My findings support the view of John Rex and Sally Tomlinson who found that the majority of West Indian parents have great academic aspirations for their children. This links to my objective on culture and whether or not the culture of West Indians leads to the underachievement in education. This can also be linked to my question on culture and educational achievement. ...read more.

I would also need to focus on a particular age group of boys as some of my respondents where in further education subsequently they found it difficult remembering their time at school. This could effect the reliability of my study. An additional problem would be the fact that my method did not involve speaking to the parents of the students. Therefore I could not find out whether there is a difference in the way Afro-Caribbean parents view education. This would have been useful to my study as this may effect the behavioural patterns of their sons. However my method only obtained one viewpoint. This could have affected the reliability of the study In conclusion my major objectives were culture and whether it has an influence on the achievement of Afro Caribbean boys. The labelling theories effect on their attainment and whether there is a laddish culture amongst Afro Caribbean boys, which could be a reason for their under-achievement. From the study it can be ascertained that culture does not have an effect on educational achievement however the case may be that it does, however the respondents may not have knowledge of it. I feel that from the study we can draw the conclusion that labelling is an issue. As the students response to streaming was based largely on what level they were placed at. Hargreave's and Becker's views on labelling and the self-fulfilling prophecy were strongly supported in this case as most of the respondents placed in the lower stream felt very disheartened as they did not think they belonged there. They took the streaming as a personal attachment given to them as being "dumb" and therefore they failed to work. Finally the issue of there being a laddish culture amongst Afro Caribbean boys is both supported and challenged. As many of the boys say that their friends did influence them to do bad things however on the contrary a large amount of respondents said that they either influenced them in a positive way or not at all. Word count = 823 TOTAL WORD COUNT = 3983 1 Charlene Douglas 1018 ...read more.