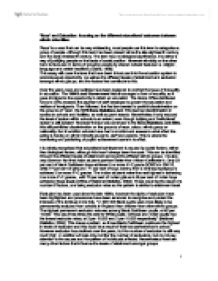 Race(TM) and Education: focusing on the different educational outcomes between ethnic minorities.

'Race' and Education: focusing on the different educational outcomes between ethnic minorities. 'Race' is a word that can be very misleading, most people use this term to categorise a group of people. Although this term has been present since the late eighteenth century and the early nineteenth century. The term has no biological significance, it is rather a way of justifying people on the basis of social position. However ethnicity on the other hand is favoured, in terms of grouping people by shared cultural features i.e. religion, language and certain traditions (Gaine, 1999). This essay will cover the laws that have been introduced into the education system to promote equal opportunity. As well as the different levels of attainment and exclusion amongst ethnic groups, and the factors that contribute to this. Over the years, laws and policies have been designed to combat the issue of inequality in education. The 1966 Local Government Act encouraged a form of equality, as it gave immigrants the opportunity to obtain an education. The Home Office distributed funds to LEAs towards the payment of staff employed to govern the education and welfare of immigrants. Then followed, the first law created to prohibit discrimination on the grounds of 'race', the 1976 Race Relations Act. ...read more.

Expectations of both 'Asian' and 'African-Caribbean pupils may have become part of the complex web of factors which actually cause patterned differences in attainment. (Gaine, C. et al, 1999, pg 107) From being perceived negatively, black Caribbean boys are all thought to be disruptive and disobedient. The same could be said for Asian students performance, because they are expected to do well and then live up to this expectation. The Curriculum is another factor that is brought to attention when looking at causes of underachievement. Even after having being revised in 2000, the National Curriculum still needs to implement cultural literature and history. As claimed by Gaine (1999) 'we are no longer simply a white, northern European, Christian, colonial power...' Schools and the Education board do not address this, as this is likely to hinder the educational success of many ethnic minorities. For example, the black history addressed in schools is lacking and the failure of many black students could be triggered by the absence of black role models i.e. ' there are many accounts of black resistance to slavery, forgotten histories such as that of Mary Seacole (the 'black Florence Nightingale' of the Crimean War)...'(Gaine,1999) Secondly, out of school factors are likely to be another result of underachievement. ...read more.

This as a whole will have negative affect on an individuals performance in education. The concept for monitoring and comparing educational attainment by grouping individuals into ethnic and social groups is very much still consistent. Black-Caribbean boys are not only being over-represented in data showing their underachievement, but they are also being 'labeled' with this negative image. From my own experience I can see that schools tend to use the variations on achievement to understand the capability of individuals, rather than understand the reasons for the variation itself. The variations in achievement by ethnic grouping is being made aware, however the causes for this underachievement and their individuals own views about their underachievement are hardly paid attention to. Despite all the laws and policies introduced, I feel that inequality within education is still present. The monitoring of individuals performance may help to assess the performance of groups. Nevertheless, it isolates those who are failing or underachieving and introduces new forms of racism itself e.g. 'labeling'. In addition laws and policies are being amended, but schools are not recognising the National Curriculum has a part in 'racism'. Education also contributes to where people are placed in wider society, and this is like a mirror image. As those who are affected by the inequality present in the education system are likely to be excluded from society as a whole. ...read more.