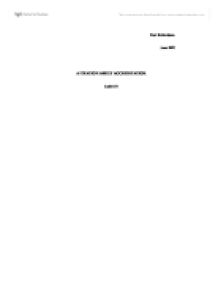 For this essay we have been asked to review an educational issue that is relevant to the current climate or as a student has some relevance and may impact on teaching. I have decided to put forward an argument against accredited learning. However we have

Paul Richardson. June 2007 A FIXATION ABOUT ACCREDITATION. Unit 117 For this essay we have been asked to review an educational issue that is relevant to the current climate or as a student has some relevance and may impact on teaching. I have decided to put forward an argument against accredited learning. However we have to first understand what accredited learning is and the process that underpins it. From here I can then move forward and give a brief description of my role as a young men's sex educator. Having identified my role we can look at the argument against accredited outcomes. As to why Durham Primary Care Trust (DPCT) and other PCTs have become fixated on accredited outcomes may be easier to say rather than identify why. Having debated the issue we can then consider the evidence put forward. One of the most common methods of gathering evidence to show that a learner has met the assessment criteria and has therefore achieved the learning outcomes is the assembling of a folder or portfolio. Open College Networks (OCN) along with other accredited bodies require evidence for NVQs and other forms of continuous professional development. Portfolio building is often seen as a very daunting and in some cases soul-destroying activity. However it doesn't have to be like this and indeed there are some very positive aspects to be stressed in the building up of evidence: * The learner ...read more.

By their very nature validating bodies are acting as regulating agencies. They require a level of detail (and so conformity) and information concerning programme design. In a sense this is understandable if national bodies are to give their seal of approval then they have to know that provision in Community A is comparable with Community B. The real risk is that providers 'learn' how to meet the needs of the validating agency and take their needs as their point of reference rather than the needs of local community organisations. From the perspective of local users the particular requirements of an accrediting body may be unknown or at least in the background. From the perspective of providers the danger is that these needs are in the foreground rather than the needs/expectations of those on the programme. In 116 I eluded to this when I commented that "I have often found that with my groups of young men their interest will wane the moment you align sexual health with an accredited outcome". Rather than developing a programme through dialogue with local groups and being able to shape it to meet very specific needs there is a risk that providers will take 'off the shelf' programmes, which are already approved. This runs counter to an ethos and approach which is about devising training needs to meet local and expressed needs. ...read more.

Robb argues that "market ideologies they have assimilated (along with others in society), the direction of the curricula they are increasingly required to 'deliver', and the readiness of the colleges, schools and agencies in which they operate to embrace corporate sponsorship and intervention have combined to degrade their work to such an extent as to question whether what they are engaged in can be rightfully called education". (Robb,113, 2002). PCTs along with other voluntary and statutory agencies have become fixated with accredited outcomes. Primarily because they provide tangible evidence for target's that have been set by central Government. However accrediting bodies provide legitimacy for providers (and funders) and therefore they have an explicit interest in achieving a badge of approval. It has currency in their terms for providers which may not be the same thing for users. Thereby the whole process itself is conservative and flawed rather than radical and empowering. Edexcel acknowledge this and have taken the controversial step in September 2007 of withdrawing their accredited music and music technology courses preferring a more robust method of assessment that has the pupils needs at heart (www.tes.2007). In conclusion as the funding needs of providers have increased this shift in focus represents a real risk. The scale of the shift, for example towards accreditation and curriculum delivery, has tipped the balance significantly away from the forms of relationship and approach to SRE that have been central to the development of post 16 youth education/engagement work. ...read more.