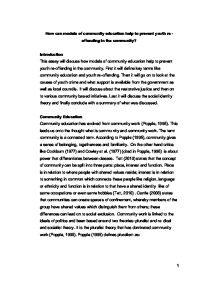 How can models of community education help to prevent youth re-offending in the community?

How can models of community education help to prevent youth re-offending in the community? Introduction This essay will discuss how models of community education help to prevent youth re-offending in the community. First it will define key terms like community education and youth re-offending. Then it will go on to look at the causes of youth crime and what support is available from the government as well as local councils. It will discuss about the restorative justice and then on to various community based initiatives. Last it will discuss the social identity theory and finally conclude with a summary of what was discussed. Community Education Community education has evolved from community work (Popple, 1995). This leads us onto the thought what is community and community work. The term community is a contested term. According to Popple (1995), community gives a sense of belonging, togetherness and familiarity. On the other hand critics like Cockburn (1977) and Cowley et al. (1977) (cited in Popple, 1995) is about power that differentiates between classes. Tett (2010) states that the concept of community can be split into three parts: place, interest and function. Place is in relation to where people with shared values reside; interest is in relation to something in common which connects these people like religion, language or ethnicity and function is in relation to that have a shared identity like of same occupations or even same hobbies (Tett, 2010). Cantle (2008) states that communities can create spaces of confinement, whereby members of the group have shared values which distinguish them from others; these differences can lead on to social exclusion. Community work is linked to the ideals of politics and been based around two theories: pluralist and radical and socialist theory. It is the pluralist theory that has dominated community work (Popple, 1995). Popple (1995) defines pluralism as: '...a political perspective that attaches major significance to pressure groups and interest groups in which, its advocates claim, are centres of power and influence.' (Popple 1995, p.4) ...read more.

It is given to anyone over the age of ten and given by the police, local authority, registered landlords or housing associations (Youth Justice Board, 2011). Local Council Jack (2005, p.299) suggests many of these programmes and services help to bring together the community which then means social cohesion. Therefore social exclusion will reduce over time. Bottoms and Wiles (1997) states that it its true that where people reside and how they communicate with one another in that area plays an important role towards crime rates (Jack 2005, p.299). Apart from government funded initiatives there have been many small programmes as well. One of these programmes is the Youth Inclusion Programme (YIP) developed in 2002. This programme was aimed at young people that were more likely to cause crime in deprived areas and concentrated on issues like pressure from friends, use of drugs and just youth with nothing to do. This was done through the use of learning, music, sports and workshops (Jack, 2005 p.301). According to the Youth Justice Board (YJB) (2003) crime rate had fallen due to this initiative (Jack, 2005 p.301). Another programme that has helped to reduce crime is Communities that Care (CtC). CtC was initially created in USA. The key aims of this were to stop low educational outcomes, misuse of drugs and young pregnancy. This initiative requires the input from the local community as well as skilled workers. This team will assess current services provided and build upon that (France and Crow, 2001 p.1-2). The final initiative is the Safer Schools Partnerships (SSPs). The YJB, Department of Education and Skills and the Association of Chief Police Officers created this initiative. The aim of this programme is to solve conflicts, behavioural issues and crime-related issues in and around schools (Burgess, 2006 p.24). Programmes like this work together with schools, police, youth offending teams (YOTs), health services and local authorities towards an early intervention. ...read more.

Most of them reflect on the models of community education. Social Identity Theory When one thinks of community the key point that comes across is the members of that community. They will have a shared vision which makes them integrated. The language of community is important towards various groups within the community. An example of this is used by the Black and Ethnic Minorities to display them (Crow and Allan, 1994). Cantle (2008) defines social identity theory as: '............we have a natural tendency to place ourselves in one group and to socially categorise people in relation to that group, often on the basis of an immediate judgement. We then favour members of our own group, at the expense of members of other groups.' (Cantle, 2008 p.115). Tajfel and Turner (1986) distinguished the difference between personal and social identity. They identified social identity it linked to the group one is associated with and members of the group want to create a positive social identity which gives more self-esteem (Brown, 2000 p.746-747). The theory is based on two factors; permeability and security. Permeability means even though there is a permeable membership of the group, if a member thinks they can be of success within society then they will move away from the group and see themselves as separate person. Security is if one thinks that their current situation unavoidable then the process of adaptation fits in (Brown, 2000 p.748). Multiculturalism creates a separation between groups and integration has to be something that bring everyone together without any boundaries. Therefore diversity has to be accepted and assimilation has to be eliminated (Phillips 2005, p.4) Conclusion Overall a combination of the various models of community education will help to prevent youth crime. This essay has discussed about community, community work and community education. It has also looked at areas on youth re-offending and the initiatives and programmes that are available for the prevention behind youth crime. The essay has discussed about restorative justice and voluntary organisations as well as the social identity theory. ...read more.