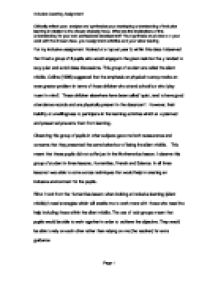 Critically reflect upon, analyse and synthesise your developing understanding of inclusive learning in relation to the chosen diversity focus. What are the implications of this understanding for your own professional development? Your synthesis must draw on your work with the chosen class, your assignment activities and your wider reading. For my inclusive assignment I looked at a top set year 9, within this class I observed that I had a group of 6 pupils who would engage in the given task but they tended to stay quiet and avoid class discussions. This group of student are called the silent middle. Collins (1996) suggested that the emphasis on physical truancy masks an even greater problem in terms of those children who attend school but who 'play truant in mind'. These children elsewhere have been called 'quiet, tend to have good attendance records and are physically present in the classroom'. However, their inability or unwillingness to participate in the learning activities which are planned and presented prevents them from learning. Observing this group of pupils in other subjects gave me both reassurance and concerns that they presented the same behaviour of being the silent middle. This meant that these pupils did not suffer just in the Mathematics lesson. I observe this group of student in three lessons, Humanities, French and Science. In all three lessons I was able to come across techniques that would help in creating an inclusive environment for the pupils. What I took from the Humanities lesson when looking at inclusive learning (silent middle) ...read more.

Also the use of the whiteboard was effective as again I was given immediate feedback and able to mentally note down if a pupils was struggling with the work. Making more use of these two resources means that I would slowly gain the confidence of the pupils (silent middle) and move them to become more active learners. Learning does not only take place when involved with whole class discussion. What I needed to do is move on to more collaborative learning strategies such as group work. I found that pupils did not know formally know how to work together in the classroom Weinstein (1991) stated that 'students need support and training in how to work together effectively...' (p.g. 8) Therefore, when I planned my second lesson I made sure I made time to formally tell the pupils of the expectation of group work and made sure for my continuation of teaching this group I kept reminding them of group work expectations. I had to reinforce the message of group work quiet a lot in the lesson as the pupils where still raising their hand for me to help them rather than using the groups. But I found it gave me a lot more time then to go around and help those pupils who were quiet in the class. I found that they was becoming more confident as they were comfortable with those pupils around them and the fact that the groups were smaller (they didn't excess 4 pupils per group), this was something which Keys and Fernandes (1993) ...read more.

I did work, they did speak out more but I found that they are so used to being quiet that it is the norm for them. This is something that Collins (1996) talk about; 'refusal to participate' (p. 42) she then goes on to talk about how their behaviour is built up over time (primary school to secondary school) and so to break this process down we need to use resources very sensitively that will eventually lead to changing these pupils into active learners. The resources that I used * Whiteboards * Traffic light system ; Red, Amber and Green cards * Groups work * Random Name selector * Not choosing the same person to speak * Asking those who are struggling to gather round a table and giving them a detail explanation on what they are struggling with. All of these ideas, point to the one objective; gaining a better relationship with the pupils so I am more approachable. I need to preserver in the group work, build up the activities of using the whiteboards and make sure that in every lesson I teach this class that I use the traffic light system. If I can teach this class over a long term then using these techniques I will be able to build confidence in the silent middle to air their ideas and thinking, to start with maybe on the whiteboard but build on this to eventually they will speak out in the lesson and become active learner like the rest of the class. ...read more.