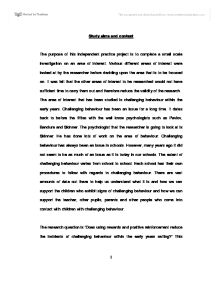 The questionnaire did not flow. The questionnaire did not state specifically enough where to place answers or if the respondent had to tick or circle the answer. Twenty copies of the re-drafted updated questionnaire were distributed to Early Years Practitioners in a mainstream primary school within an identified area. It was not considered necessary to use incentives in order to maximise responses, as it was an area that the school had identified as needing attention. The response rate for this small scale study was 90%. This rate of returns is higher than that suggested by Cohen and Manion's (1994) range of returns. They suggest that a well planned postal survey should obtain at least 40% response rate, and with judicious use of reminders, a 70% to 80% response rate is possible. Initially a letter was sent to the head teacher asking her for permission to distribute questionnaires to her Early Years Practitioners (see appendix 2). A reminder was sent to the school to remind respondents to return their questionnaires if they had not already done so. Confidentiality was assured to the respondents. This was in agreement with Opie, (2004), who suggests that 'usually, informants involved in research projects are offered assurances of confidentiality and anonymity. Presentation of the data from opinion-type questions had proved difficult. The researcher's interpretation of the opinions was needed. The researcher categorized the opinions under general heading which meant that analysis was possible. The unstructured response ensures that the respondents have the freedom to give his/her own answers as fully as he/she chooses... Data yielded in unstructured response is more difficult to code and quantify than data in the structured response (Cohen and Manion, 1994). The survey could have been extended to more schools. This would have enhanced the validity of the research but time constraints in this small scale study prevented this. Judging by the responses to the questions on the survey it is clear that although some answers were similar, most answered the questions using their own personal views. ...read more.