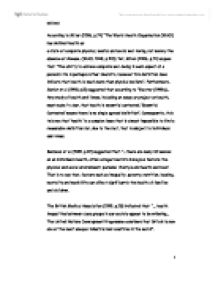 According to Miller (2006, p.74) "The World Health Organisation (WHO) has defined health as: a state of complete physical, mental and social well-being, not merely the absence of disease. (WHO, 1948, p.100). Yet, Miller (2006, p.74) argues that: "The ability to achieve complete well-being in each aspect of a person's life is perhaps rather idealistic, however this definition does indicate that health is much more than physical welfare". Furthermore, Senior et al (1998, p.5) suggested that according to "Blaxter (1999a)... Any study of health and illness, including an essay or project on health, must make it clear, that health is essential contested. 'Essential Contested' means there is no single agreed definition". Consequently, this tells me that 'health' is a complex issue that is almost impossible to find a reasonable definition for, due to the fact, that is subject to individuals own views. Benzeval et al (1995, p.22) suggested that: "...there are many influences on an individual's health, often categorised into biological factors; the physical and social environment; personal lifestyle and health services". That is to say that, factors such as inequality, poverty, nutrition, housing, mortality and morbidity can affect significantly the health of families and children. The British Medical Association (1999, p.28) indicated that: "... health inequalities between class groups in our society appear to be widening... The United Nations Development Programme considers that Britain is now one of the most unequal industrialised countries in the world". Wyse (2004, p.250) believed that: "Poverty in relation to children is caused by a number of different factors, many of which relate to the circumstances of their family". Benzeval et al (1995, p.72) also believed that: "Families with children form a disproportionate part of the poorest section of society. This is particularly true of lone parent families and the families of people who are unemployed or earn low wages". Additionaly, Benzeval et al (1995, p.10) indicated that: "In Britain mortality rates at all ages are two to three times higher among disadvantaged social groups than their more affluent counterparts. ...read more.

reiterated that the family is: the natural and fundamental group unit of society and is entitled to protection by society and the state". [Article 16(3)]. Whiting (2006, p.8) suggested that: "Most children are born into a family (Rutherford, 1998). ... Whatever the organisation of the family, most people still consider it to be the most important element in their lives (Bernardes, 1997). Whiting (2006, p.8) also suggested: as stated by "Rutherford (1998) Family will have a tremendous insight into the uniqueness of the child and their individual needs- it is therefore essential that the care of the sick child is considered within the context of the family(...)". Whiting (2006, p.17) stated that: "Teare and Smith (2004) clearly identify that parents want to be involved in the care of their sick child; in addition, key documents, such as the Children Act (1989) and the more recent National Service Framework for Children, Young People and Maternity Services (DH and DfES, 2004), state that both the child and the parents should be fully involved in decision-making processes". Therefore, it is vital that parents are involved throughout the care of their ill child because they know their children's needs better than anyone else and this is essential for the child's well- being. The European Journal of Cancer care, suggested that Woodgate (2006, p.8) performed a "longitudinal qualitative study" on the impact that childhood cancer had on the life of families and children. Woodgate's research found that many families had similar feelings towards the experience of their child having cancer. Woodgate (2006, p.11) stated that: "Upon receiving the diagnosis of cancer, the children and families realized that their world as they knew it, would and did change forever...Statements expressed by parents and children such as 'it is a huge thing to deal with 'or 'nothing will be compared to cancer' clearly reinforced cancer as a major life experience. The world as all families once knew it was no longer as safe or secure or as certain .A sense that something terrible was about to occur overshadowed children and families...". ...read more.