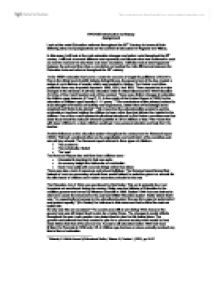 Look at the main Education reforms throughout the 20th Century in terms of their differing aims and perspectives on the control of education in England and Wales.

HY12120 Introduction to History Assignment Look at the main Education reforms throughout the 20th Century in terms of their differing aims and perspectives on the control of education in England and Wales. In this essay I will look at the main education changes and reform acts throughout the 20th century. I will look at several different acts separately and discuss what was achieved in each act and the reasons for why these acts were necessary. I will also look at what happened between the acts and then draw a conclusion comparing the main differences between the Education Acts and reforms throughout the 20th century. In the 1920's education had come a cause for concern amongst the politicians of the time. Due to the rising level of public debate during this era, the government of the day created a series of commissions of enquiry which was headed by Hadow. The Hadow committee published three very important reports in 1926, 1931, and 1933. These reports led to major changes in the structure of primary education which in effect influenced the 1944 Education Act (One of the most important acts of the century). There were distinct changes in education for children ages between 5-7 and 7-11. In the words of the Hadow Report of 1926, for the education of children aged broadly 5 - 11 years, 1 "The curriculum of the primary school is to be thought of in terms of activity and experience, rather than of knowledge to be acquired and facts to be stored." ...read more.

and 16 later on. In 1965 the government of the time issued Education Circular 10/65. This was set up to allow the LEA to move towards a more comprehensive form of schooling and then in 1967 the Plowden Committee, who were appointed by the government, recommended that changes needed to be made in primary education.2 "The fact that there was a Report on primary education gave great encouragement to those who worked in primary schools". They recommended that children should not be grouped to their abilities, more flexible teaching techniques, and a greater regard for creative subjects in primary schools. The most important act since 1944 was the 1988 Education 'reform' Act. This Act was also known as 'The Baker Act'. Named after the Secretary of the State Kenneth Baker. The Act was seen as the most important piece of Education legislation since 1944. The Act was believed to be 3"the most radical educational measure of the Thatcher period" The 1988 Education Act was presented as an Act to enable schools to maintain a larger power. However, the act took away power from the LEA's and gave all powers to the Secretary of the State Kenneth Baker. Kenneth Baker wanted to create and Education market where all the schools would compete with each other to get pupils. Places at the better schools would be in higher demand eventually leaving the worse schools to close because of the lack of pupils and leave only the best schools in each area. ...read more.

There has been much improvement over the years and many changes to go with them. The leaving age at school has been raised. Raised to 15 in the 1944 Act (however change did not come into effect until 1947) and then later in 1973 to 16. There has also been a dramatic increase in the amount of voluntary participation at schools throughout the century as the Education system has gradually improved. Undoubtedly, the education service has improved over the years. Young people are now far better educated, they enjoy greater opportunities than ever before and their aspects are also a lot higher. The 1944 and 1988 Acts paved the ways for this improvement throughout the years but there were also other factors which triumphed throughout the century. The Hadow report was vastly popular with the teachers. The results of the Hadow report meant that more children were found in primary schools, and class sizes were reduced. This allowed for a more child centred approach in teaching methods. The Plowden reports were also significant due to the fact that it reflected back to the Hadow report and its child centred approached to primary schooling. 5"The general election of May 1997 brought to a sudden end 18 years in which successive right wing conservative governments had made radical and far reaching changes to the education system". There were a few reversals to the conservative system in education such as the ending of the assisted places scheme and grant maintained schools were abolished; however, most other aspects of the conservative measured remained untouched. ...read more.