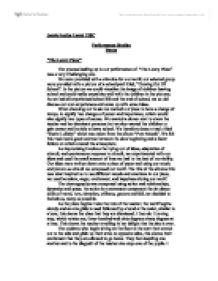 Jamie-Louise Lamb 12SC Performance Studies Dance "The Lowry Piece" The process leading up to our performance of "The Lowry Piece" was a very Challenging one. We were provided with a stimulus for our motif, our selected group were provided with a picture of a schoolyard titled, "Coming Out Of School". In the picture we could visualize the image of children leaving school and could really empathise well with the children in the pictures. As we had all experienced school life and the end of school, we could discuss our own experiences and come up with some ideas. When choosing our music we wanted our piece to have a change of tempo, to signify two changes of power and importance, which would also signify two types of scenes. We wanted a slower start to show the teacher and her dominant presence but we also wanted the children to gain power and be able to leave school. We therefore chose a track titled "Sweet Lullaby" which was taken from the album "Pure Moods". ...read more.

They then leapfrog one another and to the disgus0t of the teacher she stops one of the pupils. I then single out one of the pupils by pointing it him. Using this powerful gesture the power and importance returns to the teacher. I also use a flat palm to show that the teacher wants the student to stop; I then put my hand straight and lower it to show the student to sit. I then take 8 counts to walk over to him. The other two students are out in the playground completing a motion which shows them skipping with a rope. The teacher slashes her arms across the pupil who is sat on the floor, first to the left and then to the right and to the left again. As she does this, the student moves his head in the same direction as the teacher's slashes. This shows the pupil being disciplined. The student then jumps to his feet and begins a tussle with the teacher, the student is trying to pass the teacher but the ...read more.

It allowed us to polish and refine a planned motif so we could perform it with confidence and ease. The rehearsal period lasted about a week and still involved a development of our idea, as we had to change the routine of the motif slightly to fit the music and to help one another reach positions easier. The performance or end product seemed to go well. The whole motif went as planned except the ending, where we seemed to forget which way we were hopping and ended up giggling but other than that the dance was well constructed. If we had longer to perfect it we would obviously practice the ending but as it was the mistake at the end seemed intentional, as a typical school day is full of fun and laughter. With more time and rehearsals I would of liked to change some of the ways we travelled, it was mainly walking, then moving to our positions, perhaps we could of used different and more variations of movement. On the whole the motif went well. It was fun and beneficial. ...read more.