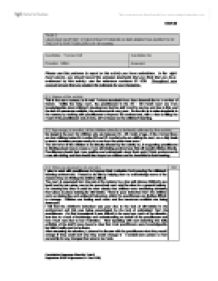 TASK 2 LEAD AND SUPPORT OTHER PRACTITIONERS IN IMPLEMENTING ASPECTS OF THE EYFS FOR TODDLERS (16-36 months) Candidate Yvonne Holt Candidate No Provider MMU Assessor Please use this proforma to report on the activity you have undertaken. In the right-hand column, you should record the principal standards that you think that you have evidenced by this activity: use the reference numbers S1-S39. Throughout your account ensure that you explain the rationale for your decisions. 2.1: Nature of the activity This is the same nursery as in task 1 whose standards have been lowered due to a number of factors. Unlike the baby room, the practitioners in the 24 - 36 month room are more knowledgeable about children's development but the staff moral is very low and due to this, and the lack of resources available, the environment is very poor. So the aim is to raise standards in the nursery by working with practitioners to improve the environment, with a view to lifting the moral of the practitioners and, in turn, aim to impact on the children's learning. 2.2: Age range, in months, of the children directly or indirectly affected by this activity My target is the room for children who are between 24 - 36 month of age. At the moment there are four children below 24 months (22 and 23 months) who are visiting the room on a daily basis to start a transition process ready to move from the under twos room. ...read more.

I got permission from other good practice nurseries to show photographs of their nursery environments. When I shared the photographs it inspired the staff to think of ways they could make their own children's environment more exciting. Firstly it was decided that they would improve the book area. At this point of the discussion it was simply an alcove which had been divided into two. One had a sign on the wall which said book corner. The sign was the only reason anyone would have known that that is what it was it was meant to be. The other half of the alcove was signed 'role play' and had in it a box with a few dressing up outfits. I asked the practitioners to think about what they thought they would like to have in the book corner to make it interesting and inviting for the children to want to be there. Finally, they drew up a list of ideas and set about creating the area. The area was soon transformed from a bare wall with a few books kept on a high shelf, to a cosy corner with a wall full of nursery rhymes and story titles including lots of pictures to highlight the text. They added a rug and some cushions and a hamper of books. They put in the area a basket of puppets and some soft teddies for comfort. The children loved it and as a consequence, they frequented it daily. ...read more.

The practitioners were able to see the difference in the children's responses to what they did and were more enthused to maintain the areas they created. The final result was that the changes impacted on children directly in that they had a better play environment and also indirectly in that the practitioners adopted a more positive and enthused approach to the way they managed the activities they provided for them. 2.6: Your personal learning Std My own learning curve was to learn how to tell the difference in poor knowledge and understanding and low motivation in people. I also felt that, although the practitioners thought they had done practically everything on their own without my support, that had originally been the intention as they had taken ownership of the changes made. Due to this, the activity was all the more successful and satisfying. The practitioners have managed to maintain the areas keeping the standards higher and the environment more interesting for the children. I believe this is mostly due to the work being done by themselves and that they can attribute the change in the children to the efforts they made. This clarified in my mind that for something to work well the ideas have to come from the people directly involved and they need to feel a sense of achievement for it to continue to be successful. This is worth much more than anything someone else can do for them. ?? ?? ?? ?? CAN:02 Candidate's Response Sheet for Task 2 September 2008 V4 [amended 01 Dec 2008] ...read more.