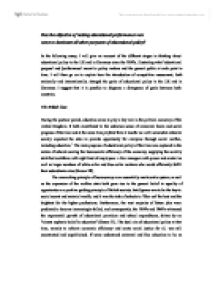 Has the objective of raising educational performance now come to dominate all other purposes of educational policy? In the following essay, I will give an account of the different stages in thinking about educational policy in the UK and in Germany since the 1950's, illustrating what 'educational purpose' and 'performance' meant to policy makers and the general public at each point in time. I will then go on to explain how the introduction of competitive assessment, both nationally and internationally, changed the goals of educational policy in the UK and in Germany. I suggest that it is possible to diagnose a divergence of goals between both countries. The British Case During the postwar period, education came to play a key role in the political economy of the United Kingdom. It both contributed to the unknown sense of economic boom and social progress of the time and at the same time profited from it insofar as a still somewhat cohesive society expected the state to provide opportunity for everyone through social welfare, including education.1 The main purpose of educational policy of the time was captured in the notion of schools serving the bureaucratic efficiency of the economy, supplying the socially stratified workforce with right kind of employees: a few managers with power and control as well as larger numbers of white-collar and blue-collar workers who would efficiently fulfill their subordinate roles (Brown 2ff). The overarching principle of bureaucracy as an essentially meritocratic system, as well as the expansion of the welfare state both gave rise to the general belief in equality of opportunity as a positive guiding principle of British society. ...read more.

With respect to educational policy goals, this meant that concerns about efficiency, speed, and cost control replaced concerns about social and educational justice (Apple 25). The change of government did not not result in a change in paradigms. Far from reversing the educational policies of the New Right, once in power, New Labour kept the focus on relentless competition, making the integration of education into the economy once more a prime goal of educational policy. Even more so, the increased attention recently paid to international league tables, often seen as indirect measures for a country's future economic competititveness, prompted the Blair government to further increase standards in the core skills numeracy and literacy in British schools (Hartley 81). This development spurred two main criticisms, the first being the obvious argument against 'teaching to the test', namely that "an educational theory with an excessive or exclusive focus on the cognitive is impoverished" (Hargreaves 488). Interestingly, however, the second argument is essentially an economic one: With the change of society into a knowledge economy, as reflected in organisational changes in how companies manage and make use of their employees' intellectual talents, it is the task of schools to foster their students' creativity and innovation skills (Hargreaves 499). Rapidly changing forms of work demand transferable problem-solving skills, self-motivation and flexibility, yet the Ofsted-endorsed traditional pedagogy of lecture-style, whole-class, subject-specific teaching to the test is unsuitable for fostering such qualities. However, fearing the high financial and political cost involved, the British government is hesitant to introduce progressive methods of teaching (Hartley 81). The argument concerning new skills sketched out above is in line with recent findings and recommendations made by the OECD. ...read more.

Has the objective of raising educational performance come to dominate all other purposes of educational policy? The historically deeply ingrained decentralisation of German educational policy makes the establishment of a national curriculum or even centrally administered testing highly unlikely. To raise educational performance while risking the social exclusion of social groups (as is being cricised in the UK) is therefore currently not the primary political goal in German educational policy. Rather, the aim is to use educational policy as a tool for more social cohesion in an already highly stratified society. Likewise, far from being in a position to complain that too much emphasis of educational policy is placed on fostering purely cognitive skills at the cost of creativity and problem-solving, the German industry has been pressuring for the advancement of at least basic cognitive skills among students. Not so much higher-skilled jobs than rather many apprenticeship places in Germany remain open due to a serious lack of starters capable of the even basic levels of reading, writing and maths (Der Standard, 25 Januar 2005). Market-style competitive structures have come to dominate British educational policy, (unintentionally) furthering the disadvantages of the already disadvantaged groups. By contrast, the results of the PISA studies have given new vigour to those in Germany pushing for the socially selective threepartite system of secondary schooling to be removed in favour of comprehensive schools. It is very doubtful whether comprehensive schooling will ever by able to compete with the engrained notion of Gymnasien being the school of choice. What is remarkable, however, is that as a result of international assessment and comparison, educational policy has assumed more of a social policy character in Germany. ...read more.