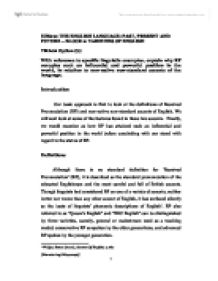 With reference to specific linguistic examples, explain why RP occupies such an influential and powerful position in the world, in relation to non-native non-standard accents of the language.

UZS210 THE ENGLISH LANGUAGE: PAST, PRESENT AND FUTURE - BLOCK 2: VARIETIES OF ENGLISH TMA02 Option (b) With reference to specific linguistic examples, explain why RP occupies such an influential and powerful position in the world, in relation to non-native non-standard accents of the language. Introduction Our basic approach is first to look at the definitions of Received Pronunciation (RP) and non-native non-standard accents of English. We will next look at some of the features found in these two accents. Finally, we would examine as how RP has attained such an influential and powerful position in the world before concluding with our stand with regard to the status of RP. Definitions Although there is no standard definition for 'Received Pronunciation' (RP), it is described as the standard pronunciation of the educated Englishman and the most careful and full of British accents. Though linguists had considered RP as one of a variety of accents, neither better nor worse than any other accent of English, it has surfaced silently as the basis of linguists' phonemic descriptions of English1. RP also referred to as "Queen's English" and "BBC English" can be distinguished by three varieties, namely, general or mainstream used as a teaching model; conservative RP as spoken by the older generations, and advanced RP spoken by the younger generation. ...read more.

There is no need to elaborate more on the voice quality of one with a Singlish accent. Anyone listening to one can more or less figuratively formed an image of the person behind the voice. Just imagine PCK reading the news over the ladio (radio). Next we like to discuss the regional variation in accent. Although RP is regional in origin, it is no longer regionally confined but strictly a class accent, to be found in the educated all over England. English accents tend to be associated with the different English-speaking areas. However, when it comes to specific regionally differentiated varieties of English, we are confronted with the issue of dialect. The difference between accent and dialect is that the former consists of pronunciation while the latter comprises grammar, words and their meanings, and pronunciation. But it is difficult to draw precise boundaries between them, and the question of where accent ends, and dialect begins is dependent on the situation and region. Differences in pronunciation were affected by the 'Great Vowel Shift', which affected the vowel pronunciation in England from around the fifteenth century. The long vowel that is now pronounced in a word like food (/u:/) in RP was the typical pronunciation in a word like cow in the Middle English period. And in present day RP vowel (/i:/) ...read more.

Though the stormy weather and runway signages were the main contributors to the crash, it was alleged that the tower duty controller had not given clear instructions for the pilot to take off. Reportedly, the duty controller on that fateful night did not report for work the next day and had apparently also resigned. In relation to RP's international status, Singlish will continue to exist side-by-side the standard accent in our local context in many of the areas mentioned above. This is because there is still a sizeable vernacular speaking local populace. Conclusion The importance RP has played goes to show that without a good and clear diction of English, it can be difficult to communicate the message or instruction what one party wants to convey to the receiving party. RP is so well received that it has become the official and working language of many international conferences. Though some delegations may not have a good command of RP, there is bound to be at least one member who is RP proficient enough to translate what his or her delegation wants to convey to the meeting, press conference or to a foreign counterpart. Hence, we concur with the notion and that there is enough evidence to justify that indeed RP had been a great influence, thus fortifying its position as a powerful communication tool in the world today. ...read more.