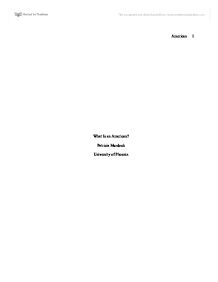 American 1 What Is an American? Patricia Murdock University of Phoenix American 2 What is an American? This question has many different answers. As defined in the Merriam-Webster Dictionary (n.d.), an American is a citizen of the United States, but being an American has a deeper meaning. Reading the letter written by J. Hector St. John Crevecoer paints a clearer picture of what it means to be an American. His words describe the new inhabitants, their way of living, and the land. He paints a virtual picture in writing to express the grandeur of this new society and what he believes is the idea of an American in the New World. ...read more.

The different people in the American colonies largely expanded the creation of the American identity. Crevecoeur writes about a colonial community of which each neighbor is from a different religion and country. He states that they worship in different ways but are worshipping a single deity, God. Neighbors are respectful and tolerant of one other even though each have differences, as they have a common goal. Families want to develop a thriving, healthy community in which they can raise their children and enjoy the fruits of their labor. ...read more.

These Europeans, who had no attachment to their homeland, became proud Americans. Here they could enjoy the rewards of their American 3 labor, worship how they wanted, and provide for their families. The new government treated them as citizens and these immigrants helped shape the American identity by taking pride in the new land. No one can perfectly define what an American is, but J. Hector St. John defined it through his eyes. America is ever-changing and growing as a nation. Americans are as diverse as the land they live in, and the Colonial Americans were proud of their country. They embraced the differences and strengths each person brought to a community and helped shape an unique American identity. ...read more.