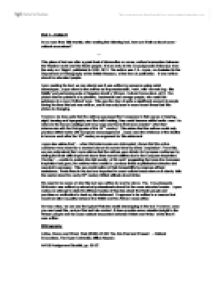 Benin art - what can it tell us about cross-cultural encounters?

Part 1 - Option B In no more than 500 words, after reading the following text, how can it tell us about cross-cultural encounters? --- This piece of text can offer a great deal of information on cross-cultural encounters between the Western world and the Benin people. It is an entry in the Encyclopaedia Britannica from the entry on 'Negro', published in 1910-1911. The author was T.A. Joyce, an Assistant in the Department of Ethnography at the British Museum, at the time of publication. It was written aimed for educated people. Upon reading the text, we can clearly see it was written by someone using racial stereotypes. Joyce refers to the natives as 'impressionable', 'vain', with 'servant dog-like fidelity' and performing acts of 'singular atrocity' (Brown, Cultural Encounters, p81). The picture that he paints is of a primitive, backwards and savage people, who need the guidance of a more 'civilized' race. This was the view of quite a significant amount of people during the time this text was written, and it has only been in more recent times that this picture is changing. However, he does sate that the natives surpassed the Europeans in their sense of hearing, sight, hearing and topography and that with training, they could become skilful craftsmen. ...read more.

One extract from The Times, after an exhibition of 300 bronze plaques at the British Museum in 1897, states '... the technical perfection of the work, are surprising evidences of the skill of the Benin native' (Loftus & Wood, Cultural Encounters, p.79). From this, we can see that evidence of skilled craftsmanship was the opposite of what the British perceived of the native, admitting the surprise of the skilfulness. They could not believe the technological sophistication and exquisite beauty and quality of these objects. What they saw was a contradiction to what many late 19th and early 20th century westerners assumed or thought about Africa and native African people. African art had a deep impact on modern art and we can see this through the works of such avant-garde artists such as Matisse and Picasso. Picasso underwent an 'African Period', when the artist was influenced by African art. In his painting Les Demoiselles d'Avignon (1907) (Illustration Booklet, p.32), two of the women are depicted with African masks or faces, which gives it a primitive feel. It was at this time that people started to look at the origins of humanity, and the term 'primitivism' was coined to describe the opinion that life was better among simpler or primitive people or during the early stages of civilization. ...read more.

Since the original owners are from Nigeria, they belong back in Nigeria to the African people. Chris Spring from the British Museum makes a different argument. He states that he is aware of the strong support for the Benin pieces to be returned to Nigeria and says that a degree of this was in the forcible way in which the pieces were removed initially in 1897. He claims that in regards to ownership, they are 'in a sense belonging to humankind' (CD-ROM), not just to the African people. He maintains that it is important for the pieces to be displayed here in order to educate people about African culture as well as how they contribute to the world cultural heritage belonging to all people, when they walk into the British Museum. It is also a way of helping to re-educate the racist stereotyping of primitive, savage Africa that people, even today, still believe. In conclusion, these examples can help us see the way in which African art, history and culture has changed since the arrival of the Benin artworks in 1897. We can also expect them to continually change and re-shape the way in which people perceives African history and culture in the future. ...read more.