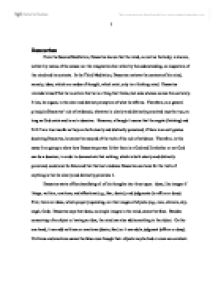 Descartes From the Second Meditation, Descartes knows that the mind, as well as the body, is known, neither by means of the senses nor the imagination but rather by the understanding, an inspection of the mind and its contents. In the Third Meditation, Descartes reviews the contents of his mind, namely, ideas, which are modes of thought, which exist, only in a thinking mind. Descartes reminds himself that he is certain that he is a thing that thinks, but asks whence comes this certainty. It lies, he argues, in the clear and distinct perception of what he affirms. Therefore, as a general principle (Descartes' rule of evidence), whatever is clearly and distinctly perceived must be true, as long as God exists and is not a deceiver. However, although it seems that the cogito (thinking) and 2+3=5 are true insofar as they are both clearly and distinctly perceived, if there is an evil genius deceiving Descartes, he cannot be assured of the truth of his rule of evidence. Therefore, in this essay I am going to show how Descartes proves 1) that there is a God and 2) whether or not God can be a deceiver, in order to demonstrate that nothing, which is both clearly and distinctly perceived, could ever be false and that the best evidence Descartes can have for the truth of anything is that he clearly and distinctly perceives it. ...read more.

According to Descartes, a cause can only give to the effect as much reality as the cause itself; "there must be at least as much reality in the efficient and total cause as there is in the effect" (28). Hence, nothing can come from nothing. For instance, a stone can be made by chipping off a larger piece of rock, since the larger rock has more (or just as much) reality, but a stone cannot be made out of a colour, since a stone has more reality than a colour. Descartes also suggests that an idea can only be caused by something that ahs as much formal reality as the idea has objective reality. A stone or a large rock, then, could cause the idea of a stone, but it could not be caused by colour. Therefore, Descartes grants that ideas can be caused by other ideas, but that there must ultimately be something more than an idea that is the cause of these ideas. The first cause of an idea must be something with at least as much formal reality as the idea has objective reality. If he can conceive of some idea with so much objective reality than it must come from some cause with more formal reality than he himself possesses, Descartes reasons that he will then know that something outside his mind exists to create this idea. ...read more.

We can trace this chain back through countless creators, but we must ultimately conclude that the idea of God can originate only in God, and not in some finite being. Therefore 5) God must be the cause of Descartes. Having concluded that God must necessarily exist, Descartes asks how he received the idea of God. The idea cannot be adventitious, coming from without, nor can Descartes have invented it. Thus, the idea must be innate, and God must have created Descartes with this idea already in him. Therefore, the whole force of the argument lies on the fact that he recognized that it would be impossible for him to exist, being of such nature as he is, namely, having in him the idea of God, unless God did in fact exist. He clearly and distinctly perceives that God is no deceiver, since all deception relies on some defect or other, and a perfect God has no defects. Descartes has eliminated both himself and the outside world as possible causes of his idea of God, Therefore this proof of God relies on casual reasoning, suggesting that there must be a cause of the idea of God that is as great as God Himself. Though my idea of God might have come from my grandparents, and their idea came from the minister, the suggestion is that at the end of that casual chain, there is a first cause, which is God. ?? ?? ?? ?? 1 ...read more.